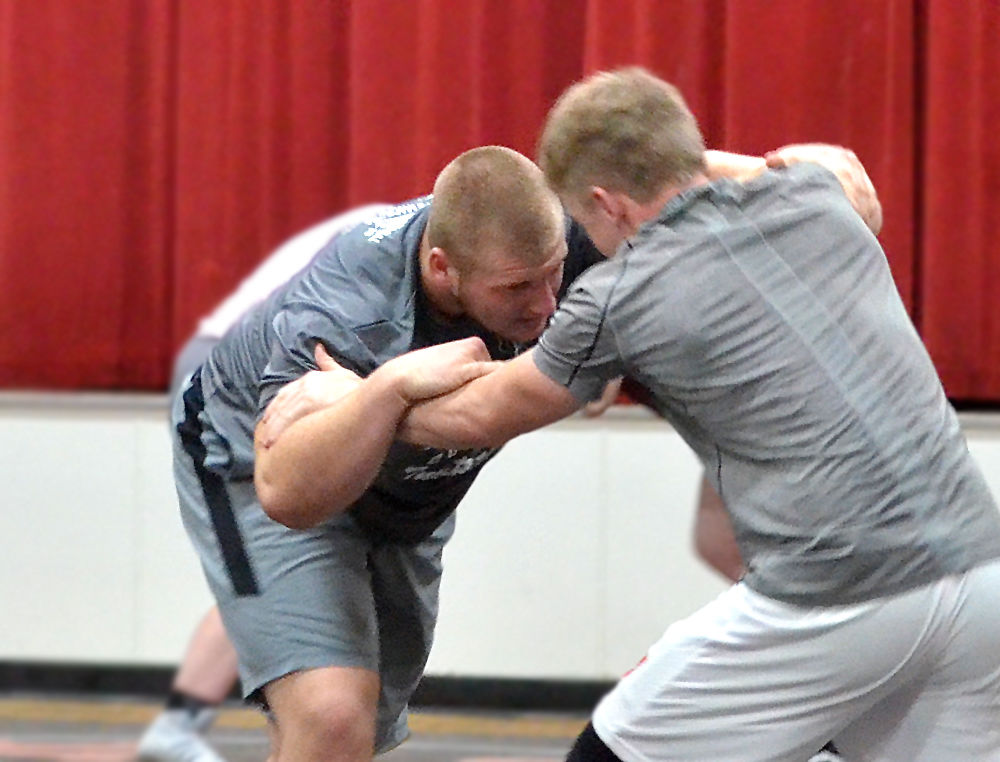 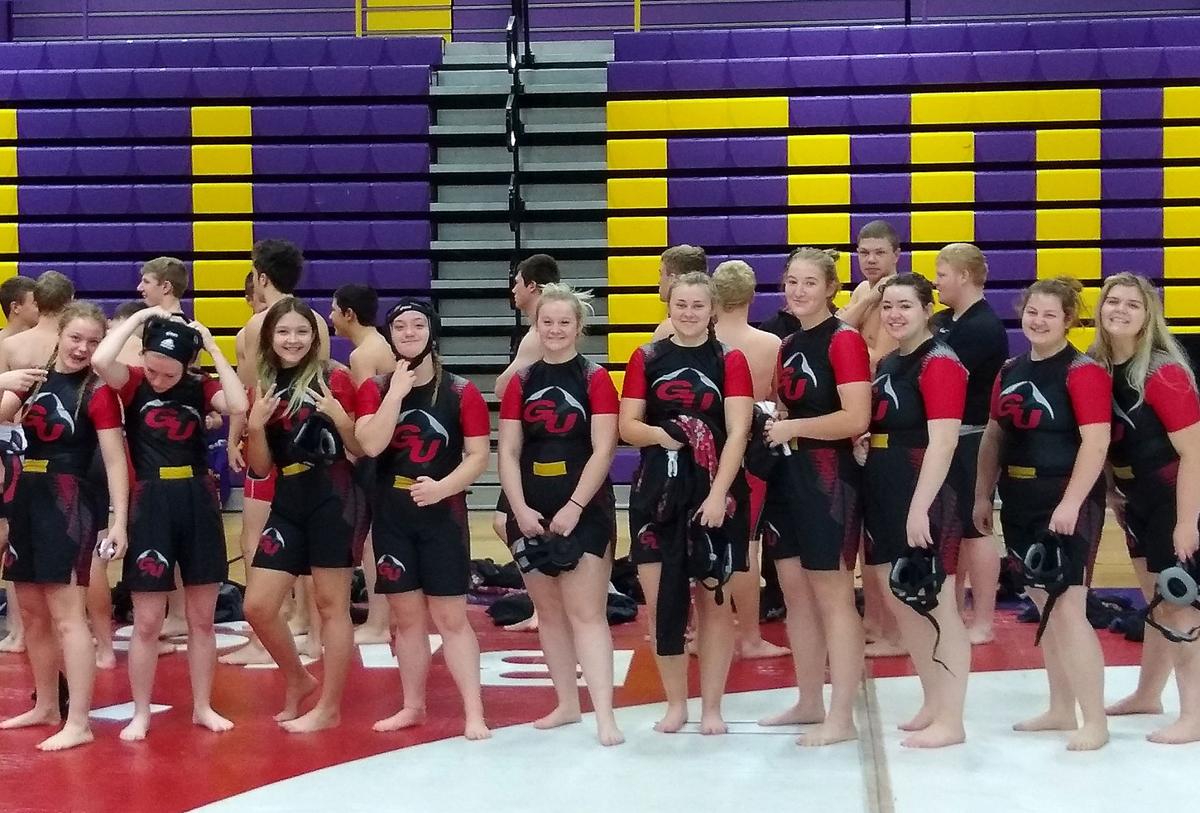 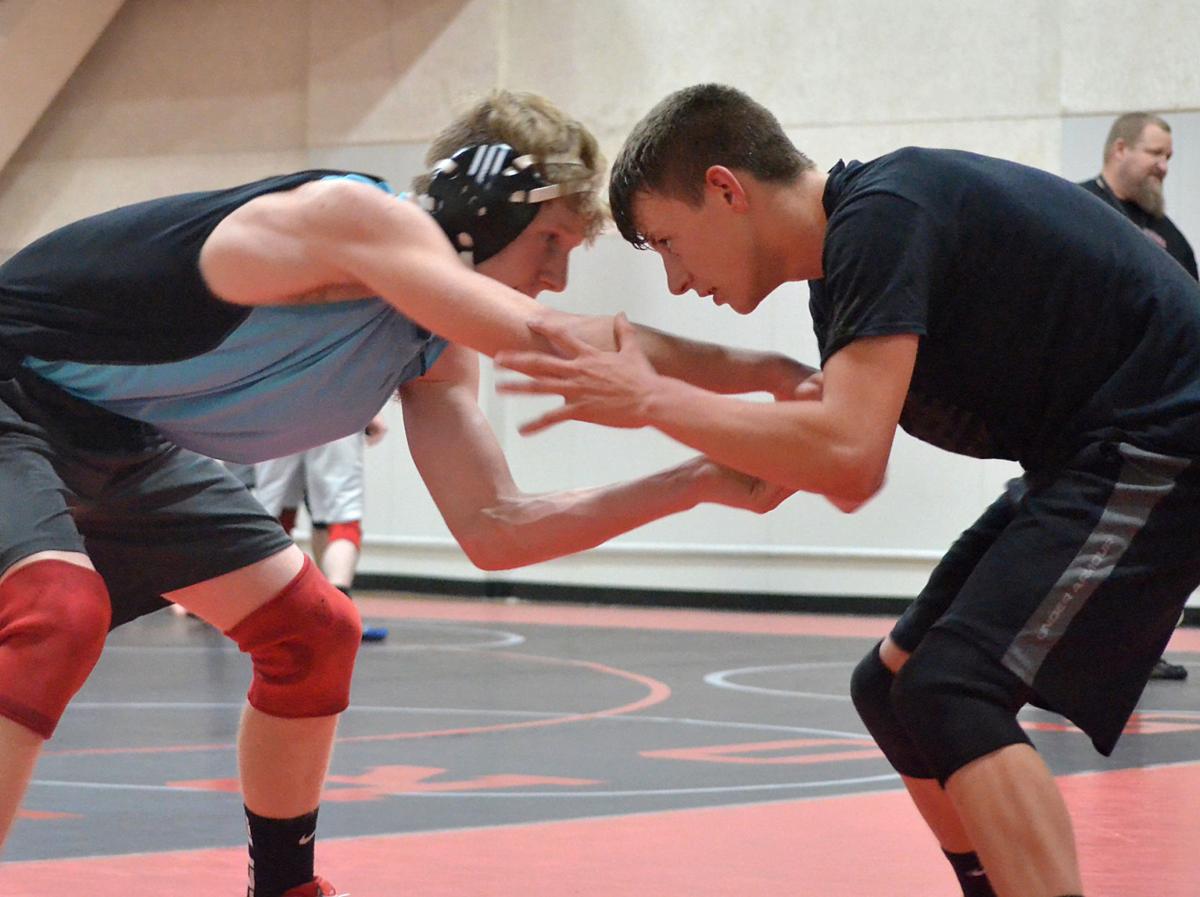 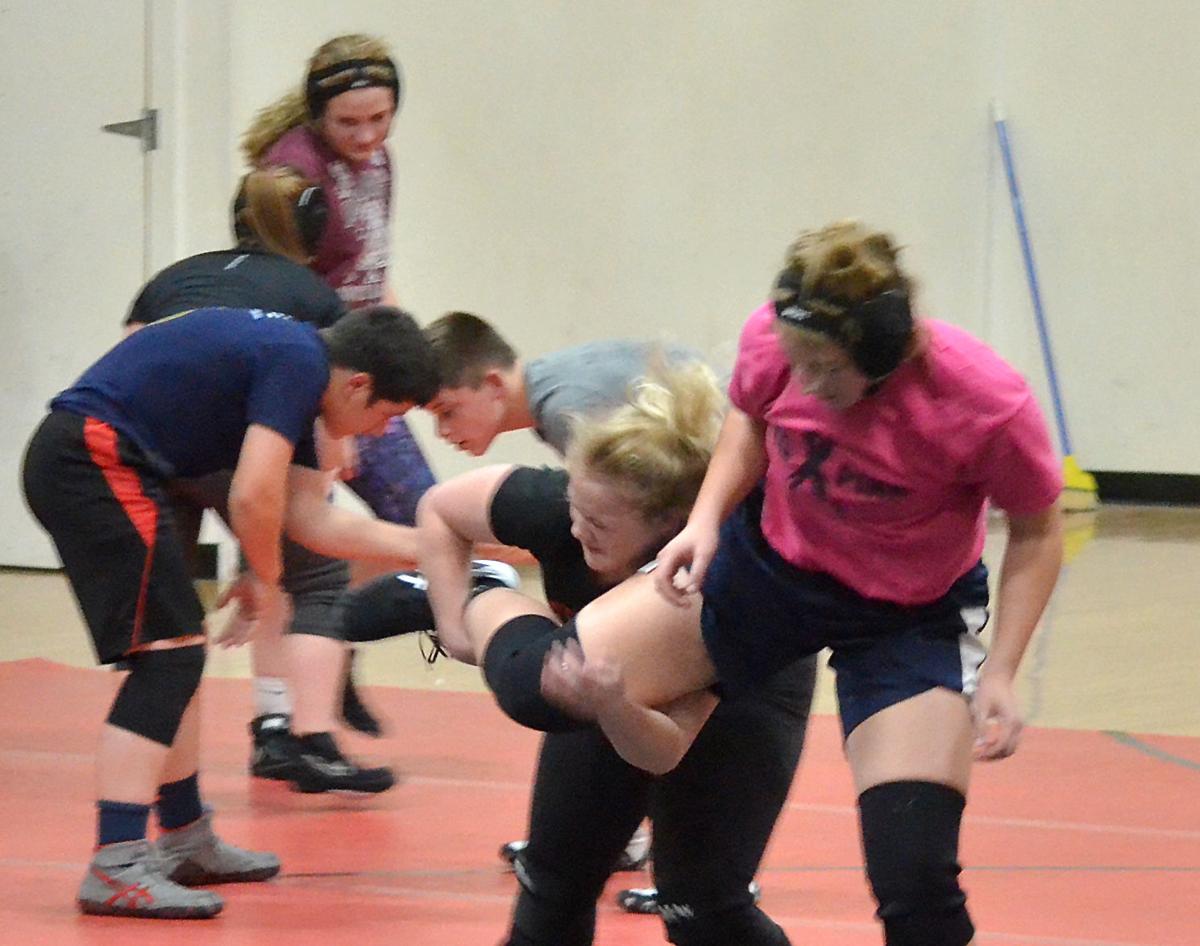 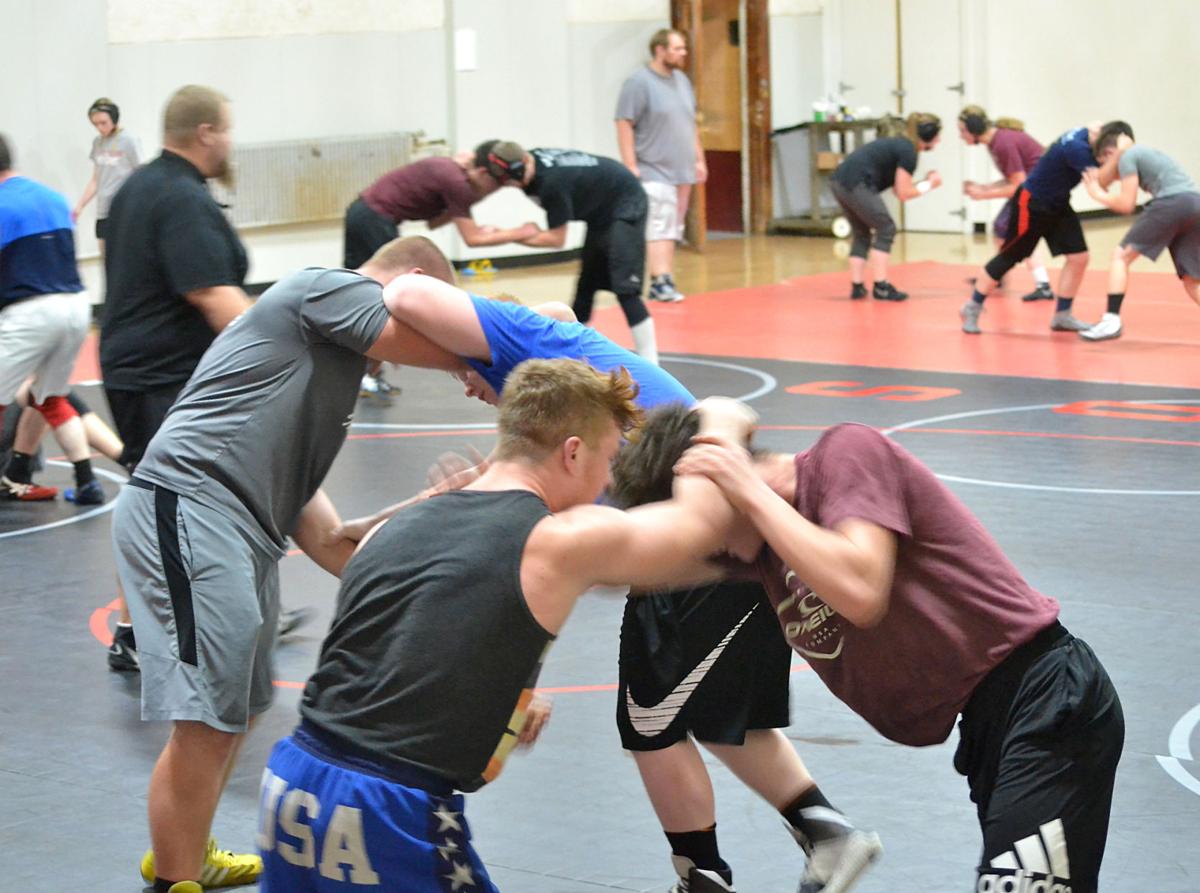 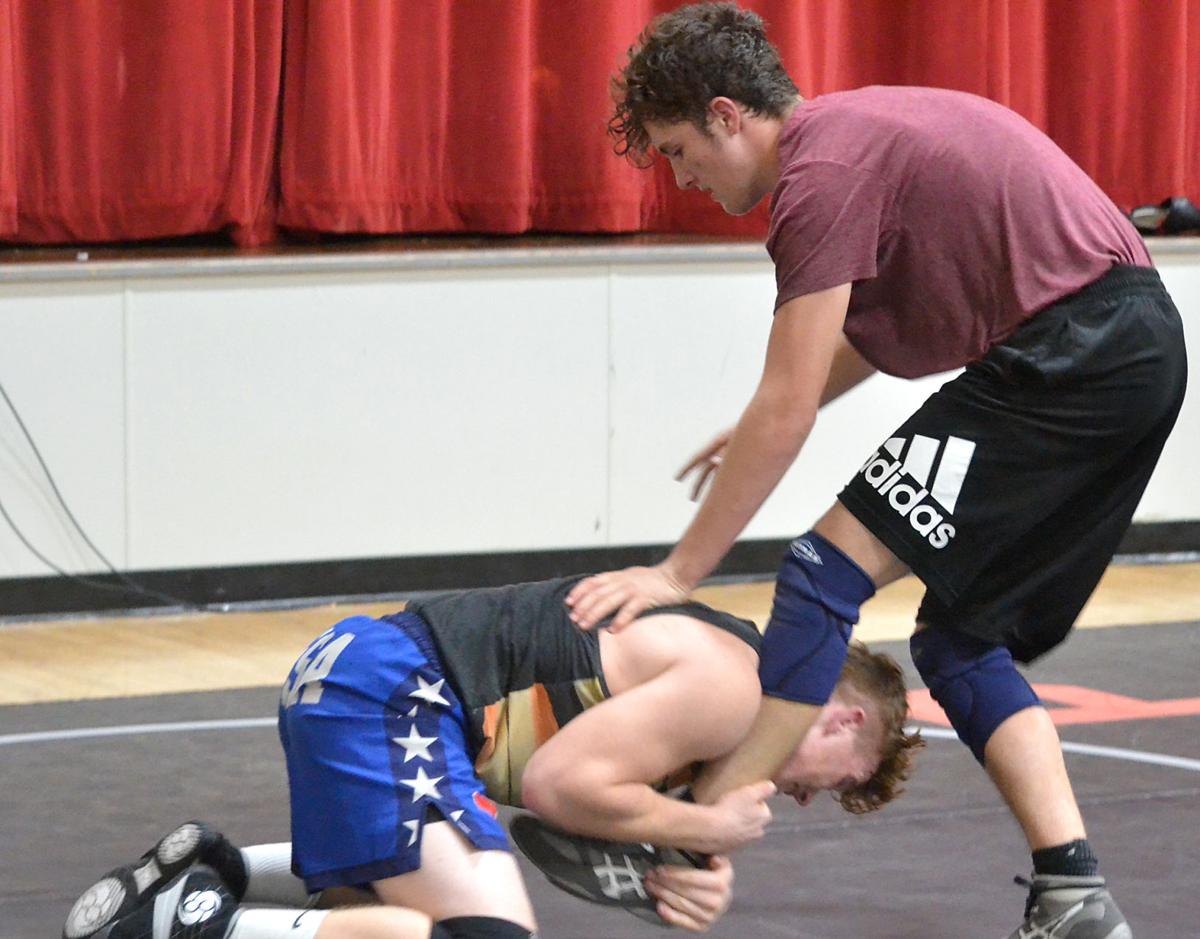 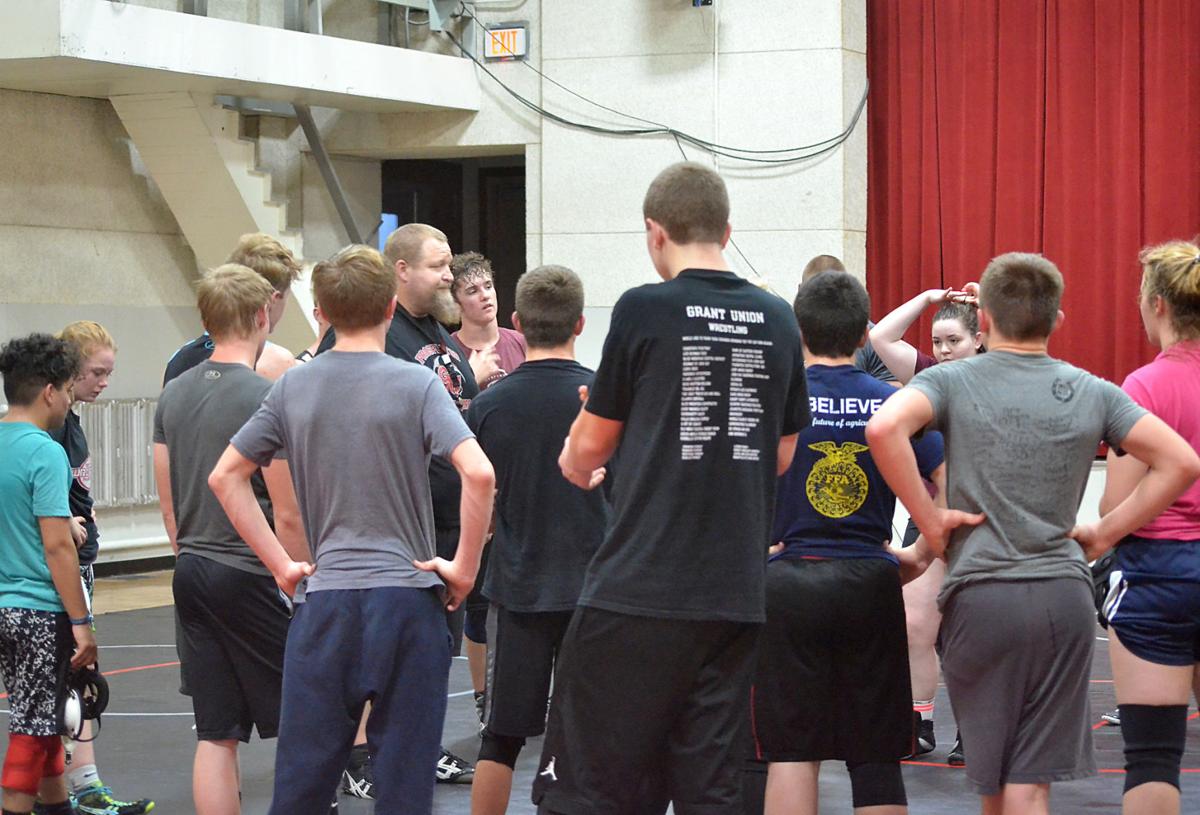 Grant Union Prospector wrestlers gather around their coach during their Dec. 5 practice. 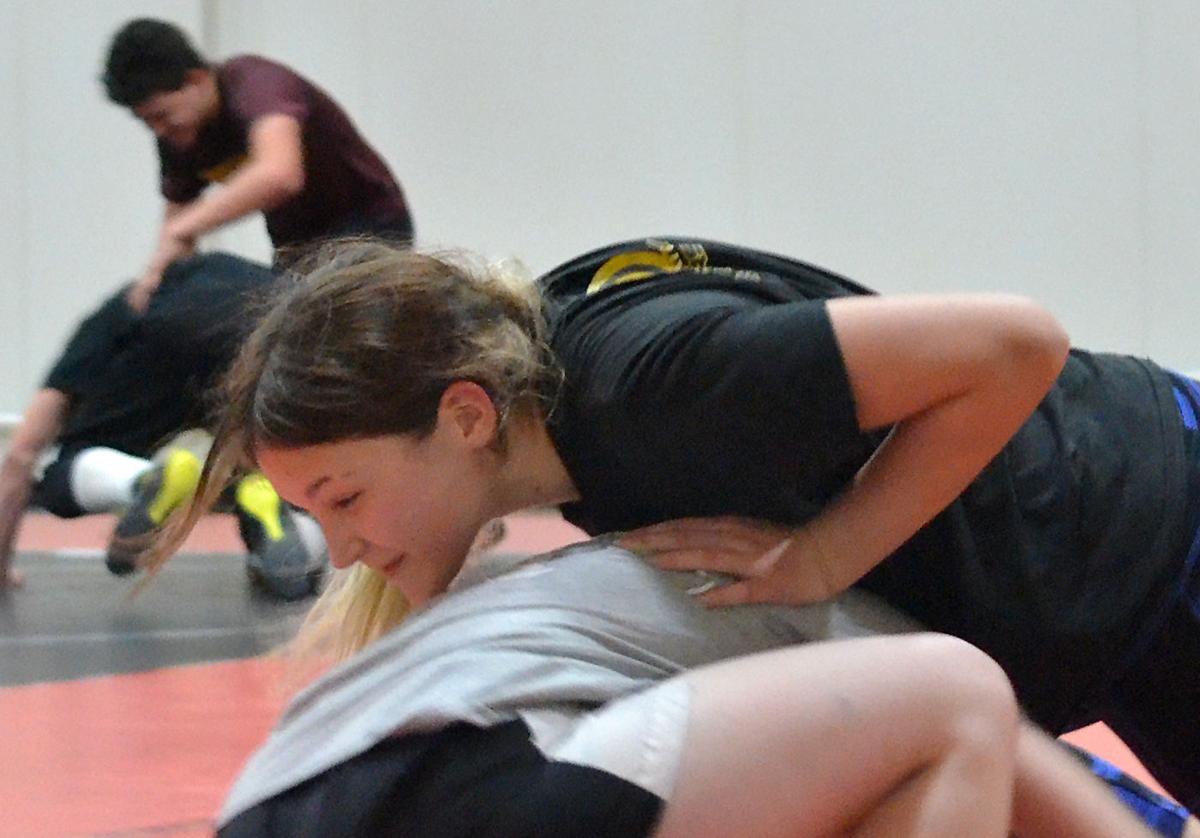 Grant Union Prospectors are hard at work during their Dec. 5 practice. 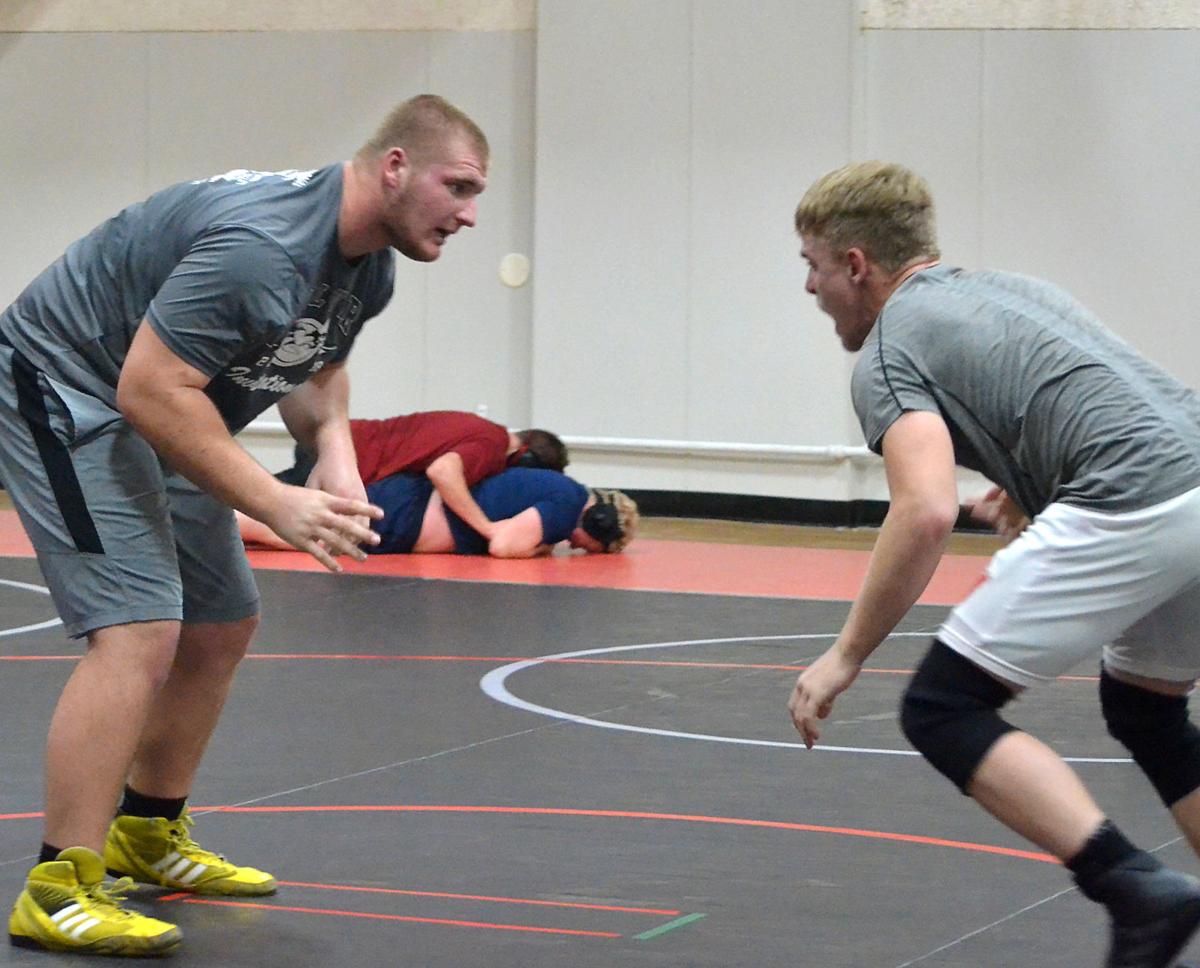 Grant Union Prospectors Drew Lusco, left, and Quinten Hallgarth go for another round in the Dec. 5 practice. 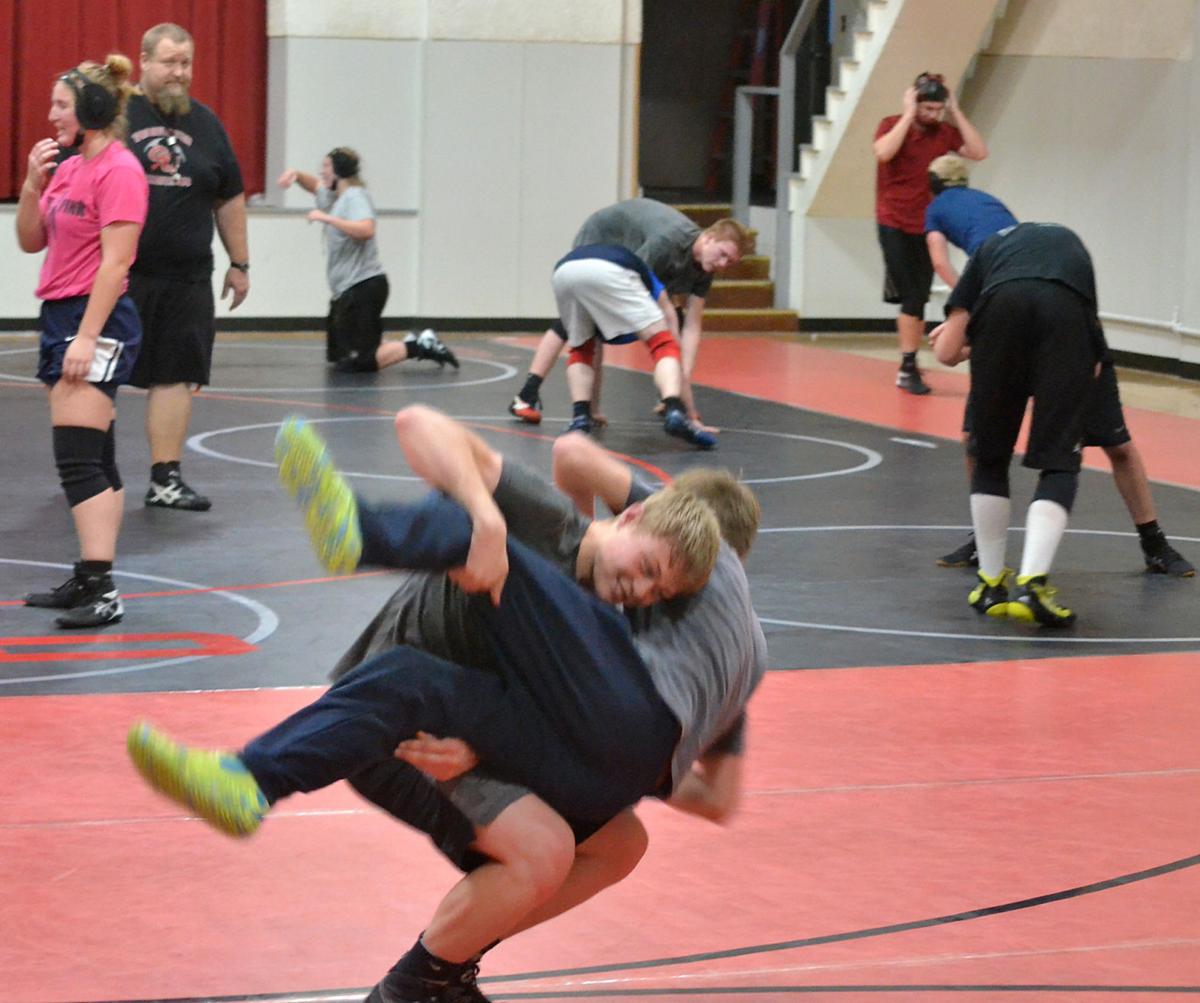 The Grant Union Prospector wrestlers work on drills at practice. 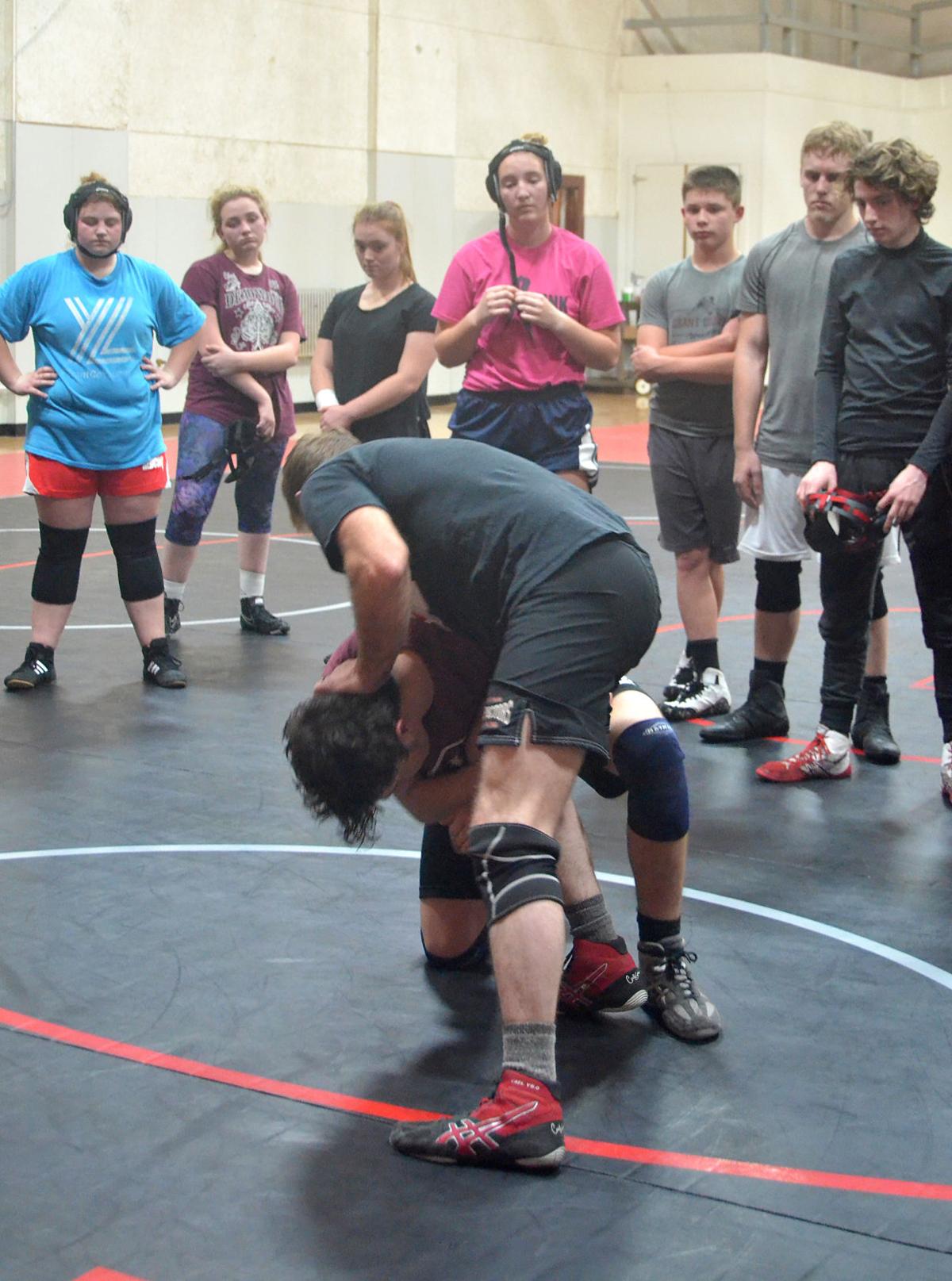 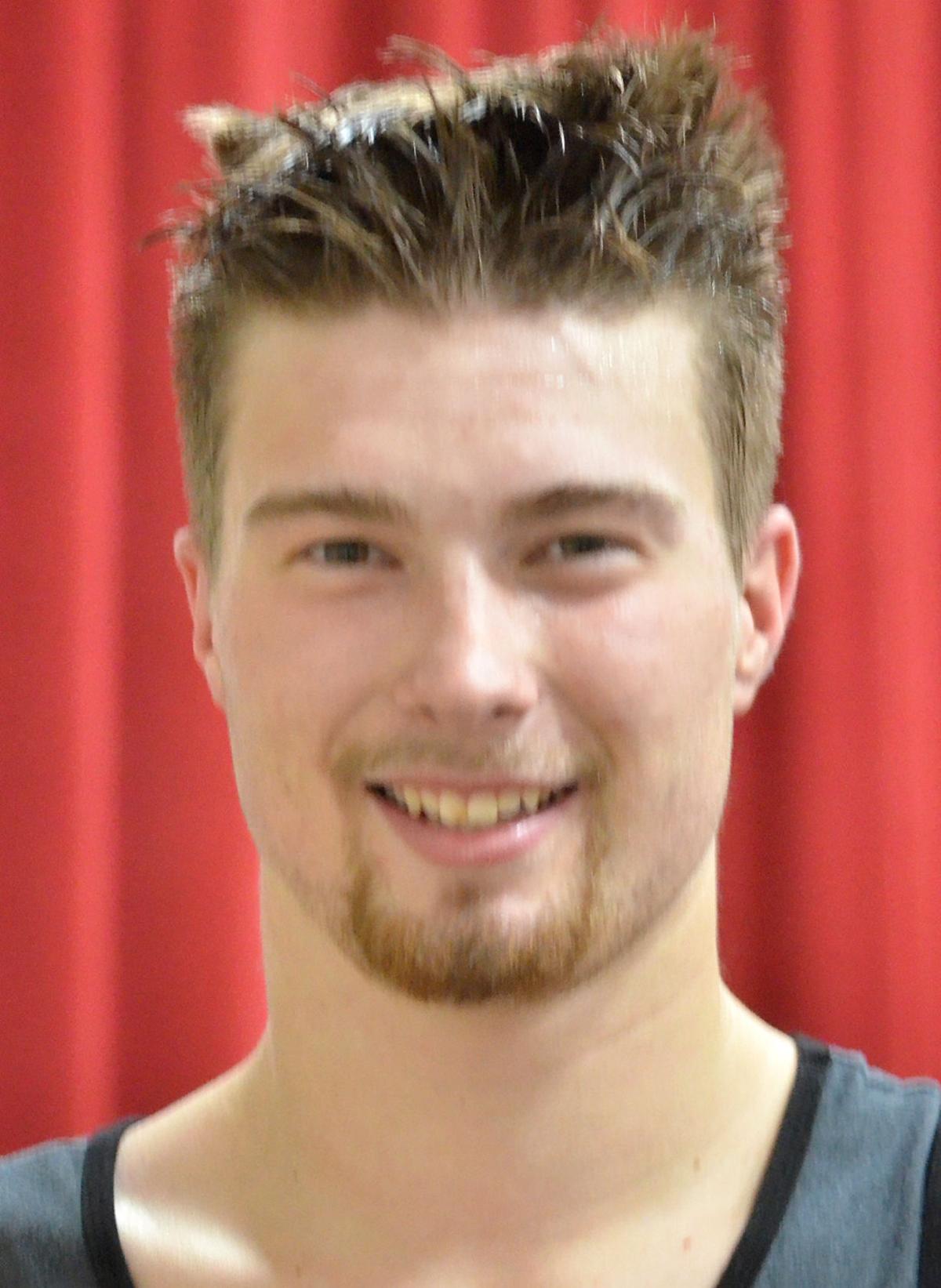 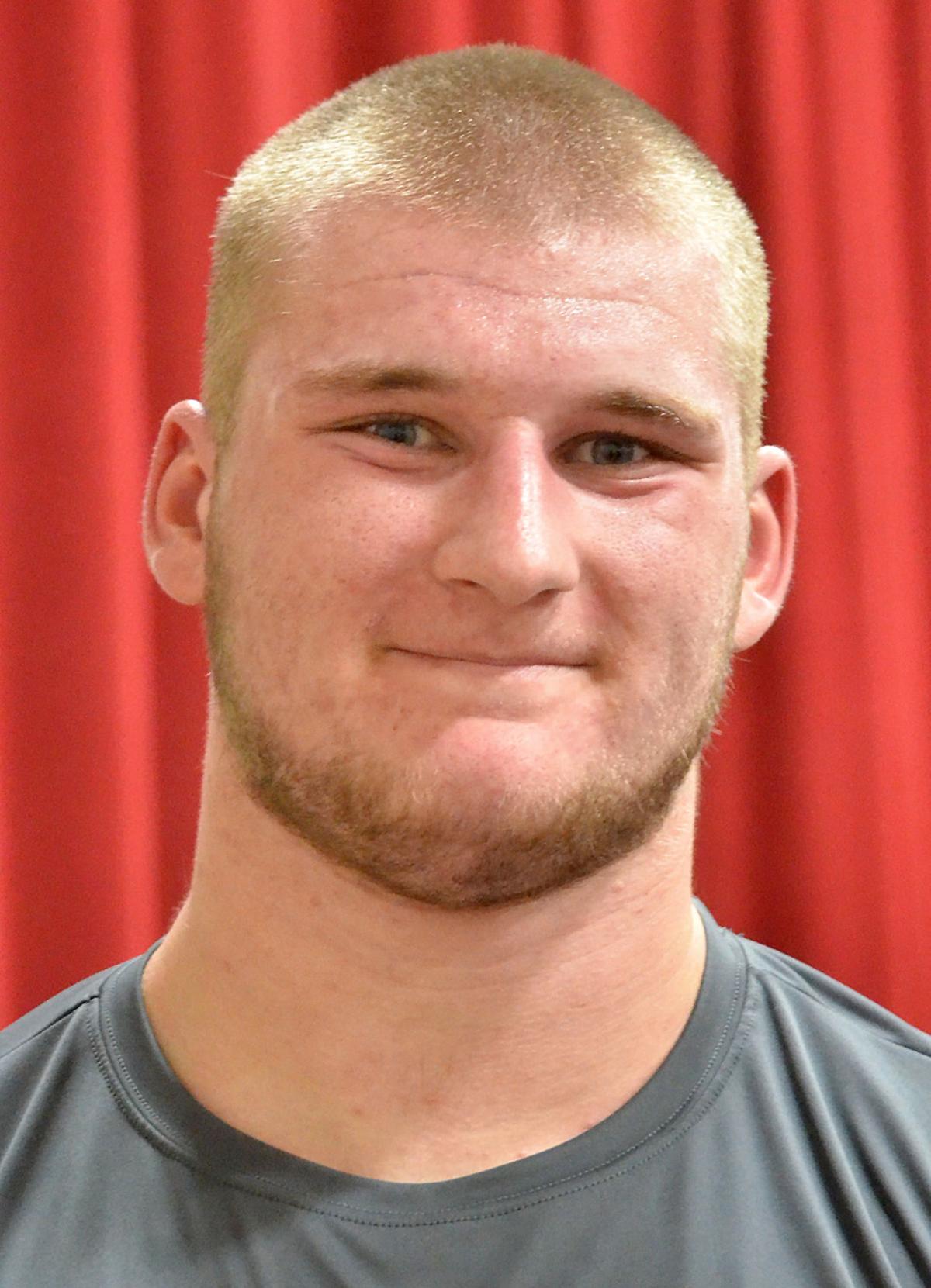 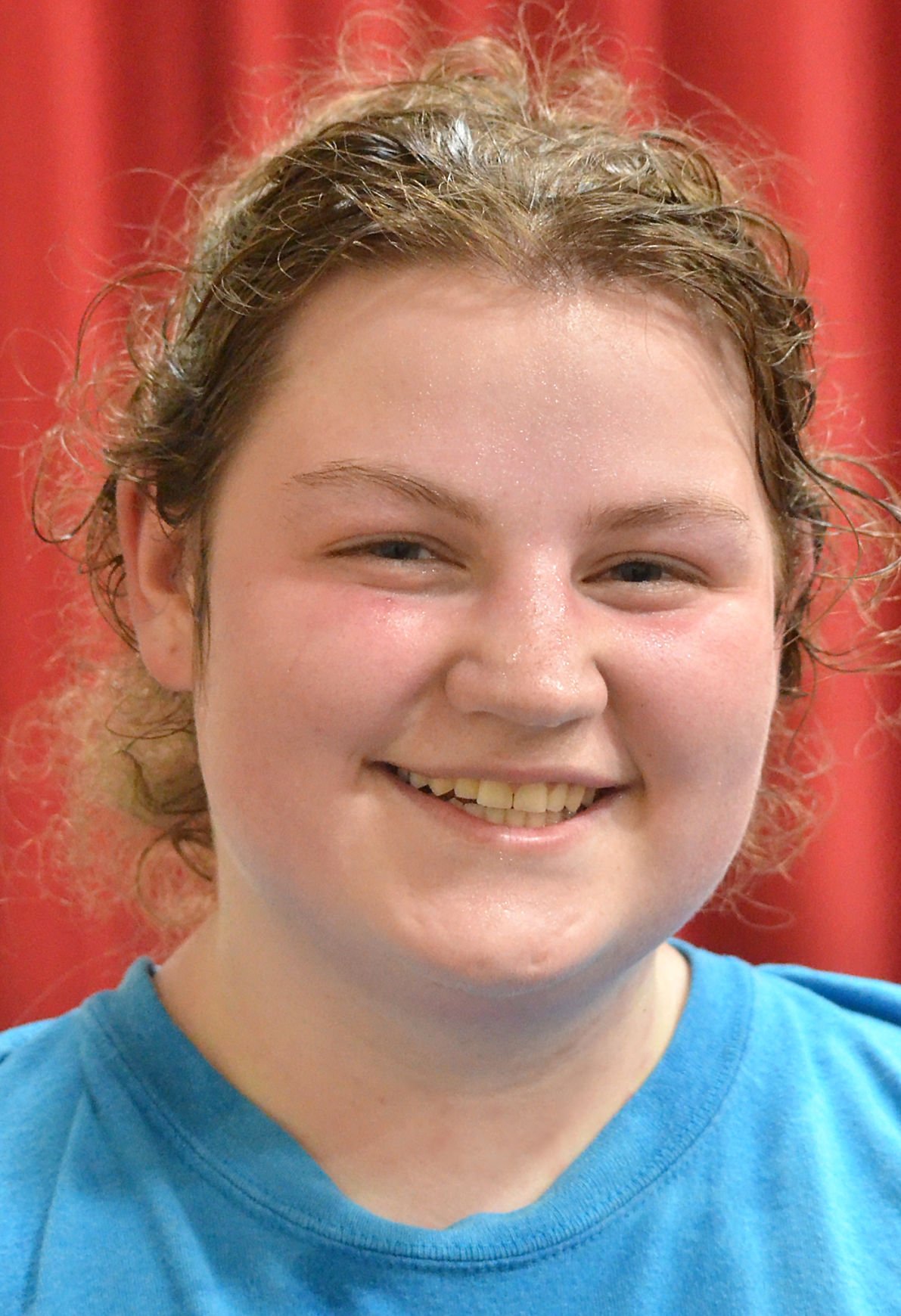 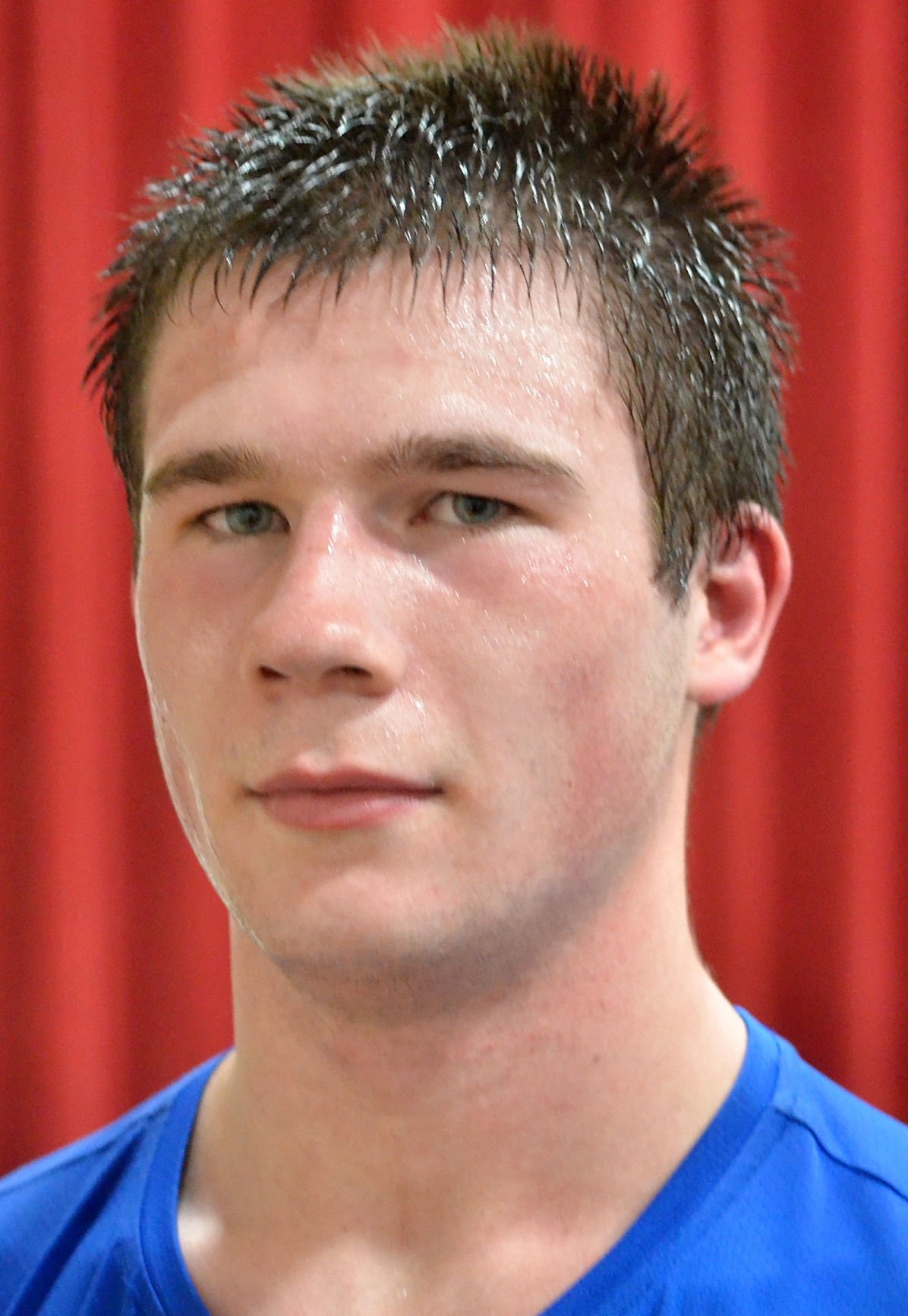 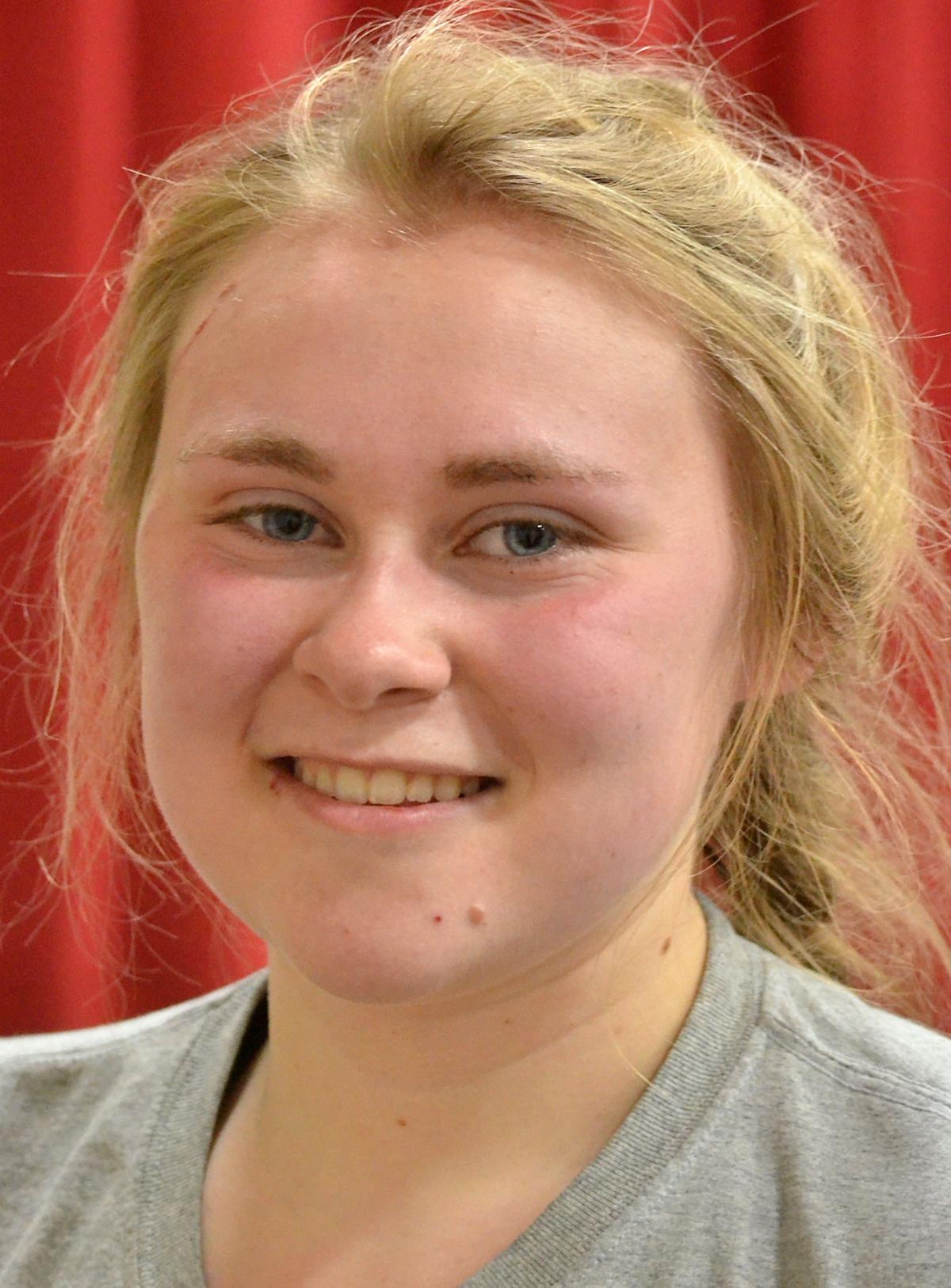 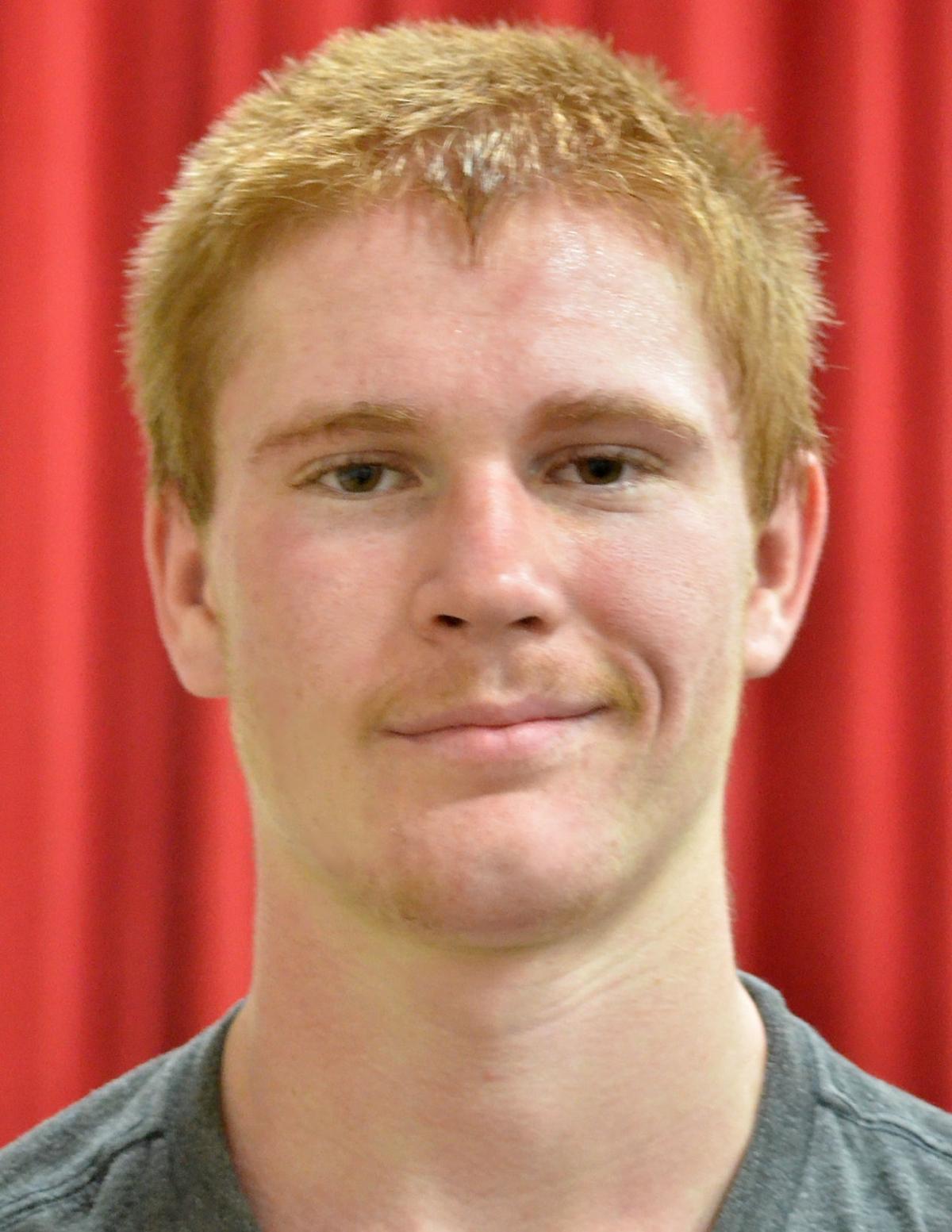 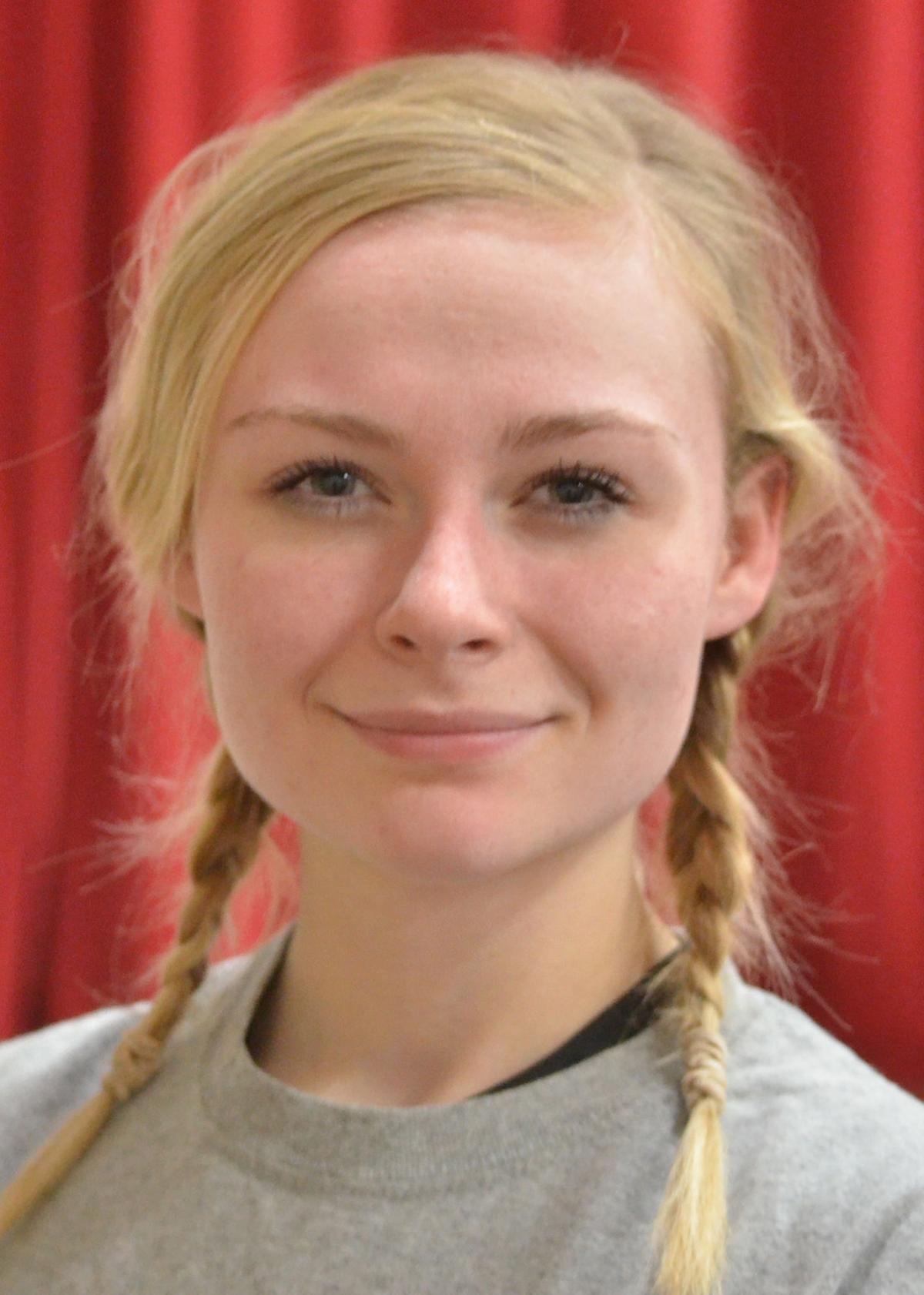 Grant Union Prospector wrestlers gather around their coach during their Dec. 5 practice.

Grant Union Prospectors are hard at work during their Dec. 5 practice.

Grant Union Prospectors Drew Lusco, left, and Quinten Hallgarth go for another round in the Dec. 5 practice.

The Grant Union Prospector wrestlers work on drills at practice.

The 2A Grant Union Prospector wrestling team, with 21 boys and 13 girls, is busy working drills and preparing for the tough schedule ahead.

With several new wrestlers, Andy Lusco, in his eighth year as the Prospector head coach, reminded the team they need to work through their sore muscles and pain with mental toughness.

“We have 34 kids here, and 20 are new,” he said. “When you get kids like that, it’s learning to retrain the brain. This is very difficult. They’re to be commended for sticking with it.”

Senior Drew Lusco, wrestling in the 285-pound heavyweight bracket, had a second-place finish in the state championship final round last year as a junior, falling to a Central Linn senior by 1 penalty point. Drew Lusco was state champion in 2017, during his sophomore year.

Senior Russell Hodge qualified for state after placing second (182) at the Special District 4 tournament in Halfway. He was just shy of making the podium, placing fifth at state.

Senior Damion Young, sophomore Justin Hodge and sophomore Ethan Moore, who made the podium at last year’s district tournament, are also expected to be major contenders this year. Moore qualified for state his freshman year.

Last season was a one for the record books for the girls.

Trinity Hutchison, who graduated in June, won the championship title in the 155-pound bracket, and Arionna Young, as a freshman last year, had a second-place finish, wrestling at 115.

The girls had their work cut out for them, competing with other females in 1A-6A class schools, and that will be the case again this season.

Two girls are returning to the mats, junior Sophie Brockway and sophomore Ashley Henry. The team has more than doubled their numbers, growing from six wrestlers to 13.

The coach mentioned five wrestlers from the boys team expected to be major contenders this season.

“Drew is in the hunt for trying to win the championship,” Andy Lusco said. “I think he’s pretty motivated.”

The other threats, Damion Young, Justin Hodge and Ethan Moore, are also expected to perform well.

“Justin is one of the best in the state,” coach Lusco said. “We just need to get him out of districts. We have a tough district.”

There are other team members also making a statement on the mats.

The biggest challenge among the district competition is the Culver Bulldogs.

“Culver is a perennial challenge,” Andy Lusco said. “They had a total of 11 qualifiers for state in 2A last season.”

There are seven seniors this season, four boys with experience and three girls who are new to the program.

Drew Lusco, who was district champion last season, said his goal is to become state champion again. He said missing the title last year was disappointing, but he’s ready to increase his skills and conditioning to take on the challenge this season.

“You have to want to win,” he said. “Usually the guy who wants to win the most wins.”

Russell Hodge, second at the district meet last season, said he might have a better chance this year since it appears his major contenders have graduated.

“My goal is to place first in state,” he said. “When I practice, I think of my competitors practicing, and I try to work harder than they would.”

Damion Young, who has been wrestling for six years and currently wrestles at 160, said he hopes to qualify for state.

Frank Douglass said his goal is to push himself to go as far as he can this season by staying focused and asking for assistance when needed.

“The coach gives orders, and I follow them,” he said. “I hope to get a few wins.”

Fallen Bolman is new to the sport, but she’s been the team’s statistician for the past three years.

She said she’s found the team to be welcoming and the coach “super helpful.”

Bolman said she’ll be “trying to remember everything that I’ve learned and not letting ‘myself’ get me — keep my mind in the game.”

Both Megan McManama and Samantha Floyd said they’ve been wanting to join the team the last few years.

“It’s a lot of work and it’s hard, but it’s worth it,” McManama said. “You start as strangers but leave with a family.”

Floyd said she didn’t have the confidence to join until she saw the team had grown. She hadn’t played a sport since middle school, so just getting through the first day of warmups was a win, she said.

“I’ve learned that I’m capable of much more than I thought I was,” she said. “I want to encourage others.”

“We’re seeing more than half the other teams have at least one girl,” he said. “I think it’s going to grow. They’ve doubled their opponents this year, and that means twice as many will be going to state. There are no divisions for girls who wrestle at state, so they compete with other girls in 1A through 6A. The divisions will eventually come.”

He added, “Most of the girls are new, but 13 girls working hard is awesome, and it’s fun to coach them.”

Looking at the season ahead, coach Lusco is known for pushing the basics.

“Conditioning and working on fundamentals,” he said.

The team gathered in a large circle around assistant coach Parsons as he demonstrated a drill with freshman Jack Strong. Then the team — filling the Grant Union old gym on the mats — paired up and went to work.

Parsons is also the head coach for the Grant County Wrestling Club with 54 team members from ages 4-15.

Coach Lusco said more club members will move through that program and up to the high school level.

“We’re keeping the program alive — that was the goal, to have a good program for kids who’ve been wrestling since they were 4,” he said. “The best kids are club kids.”

He said wrestling as a club sport is popular statewide, including in Eastern Oregon — Pendleton, Baker City, Burns, Prineville, Joseph are just a few.

“We’ve got to get there to meet those teams on equal footing,” he said.