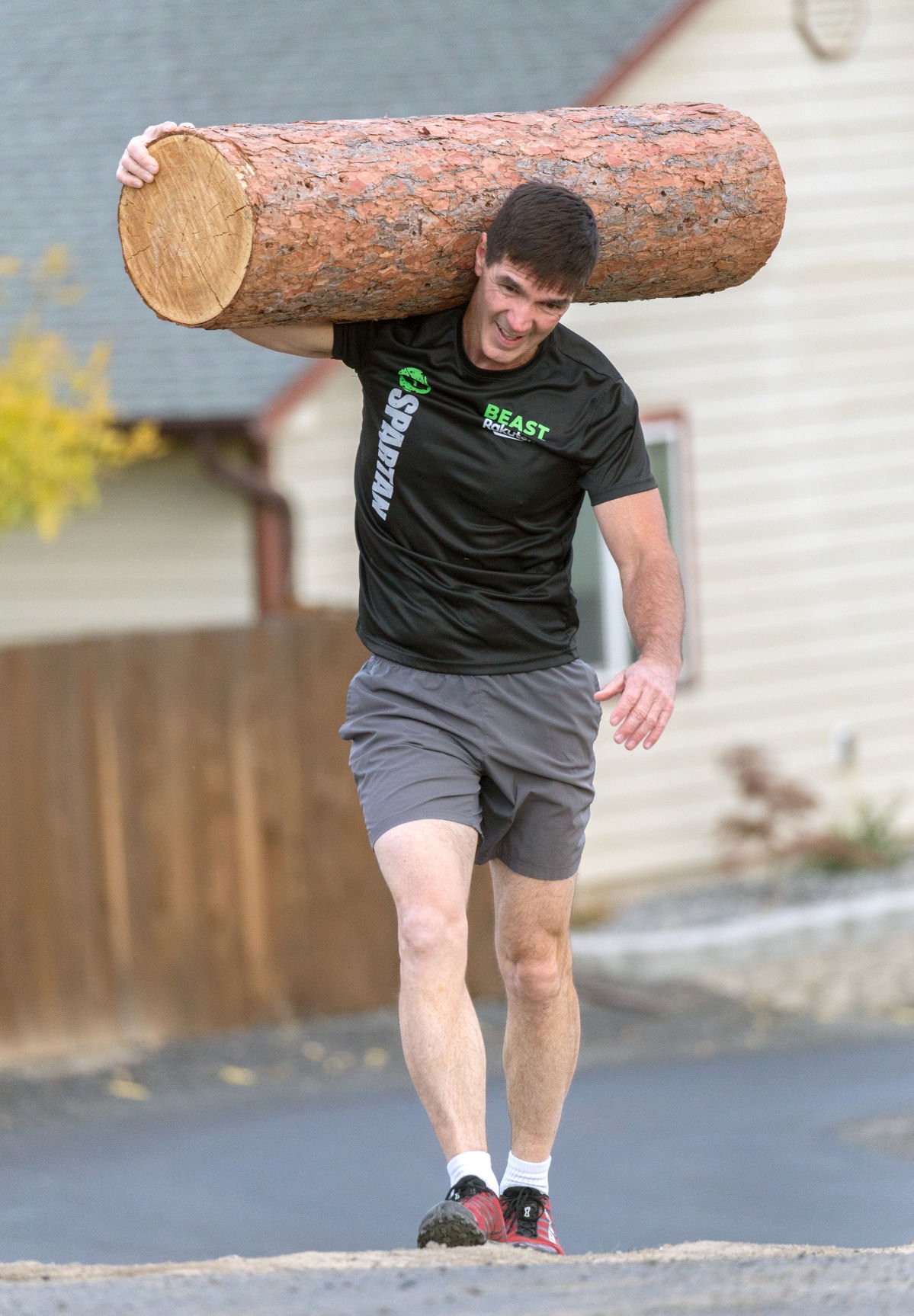 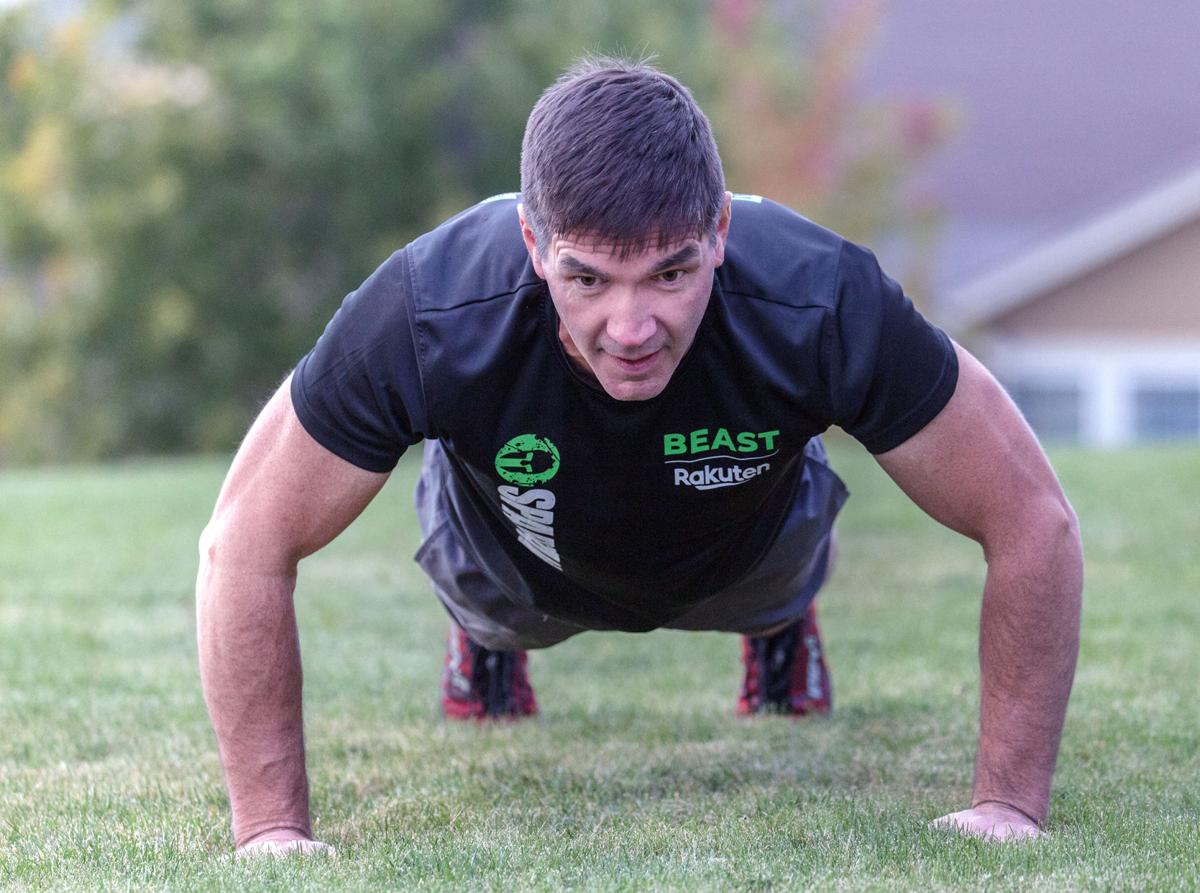 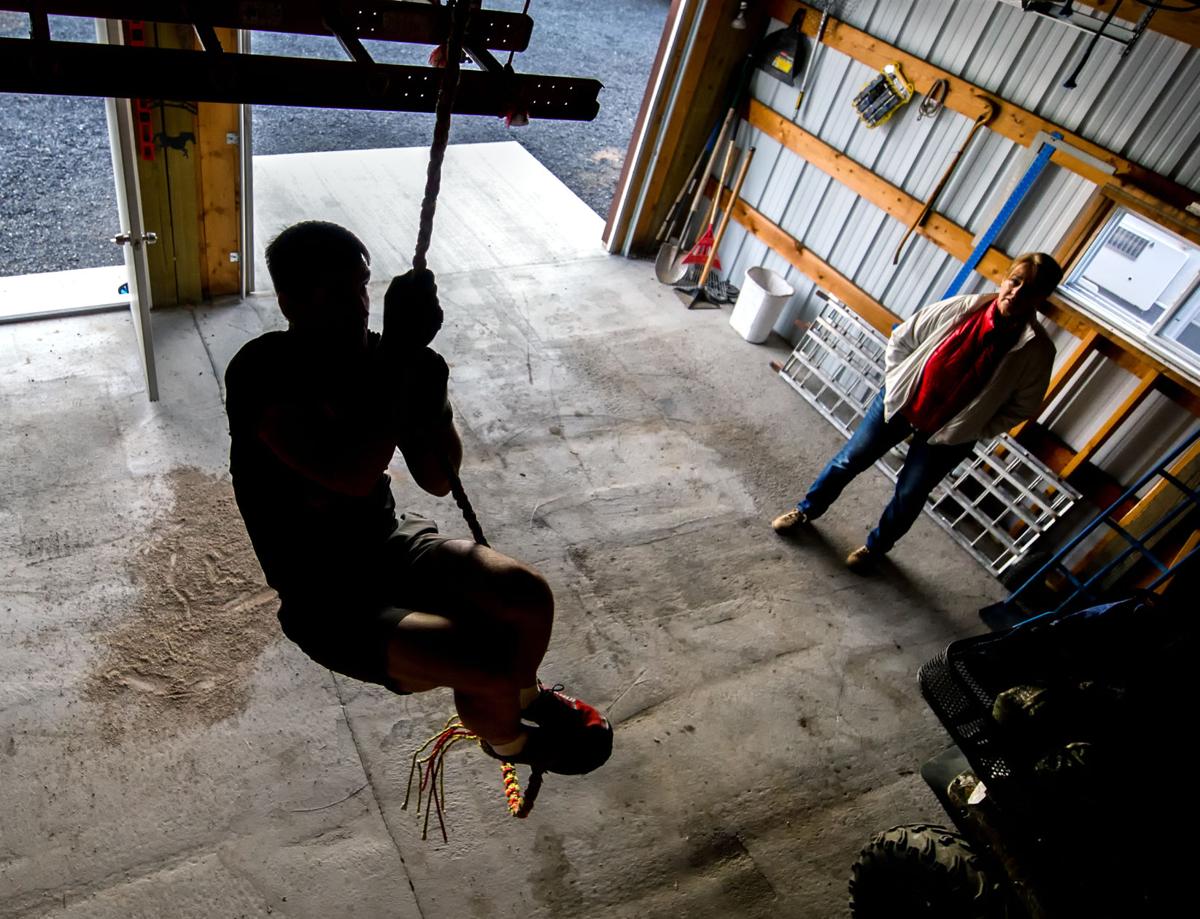 Charity Boyer watches her husband, Richard, climb a rope in their home shop in Pendleton as part of his Spartan Race workout. 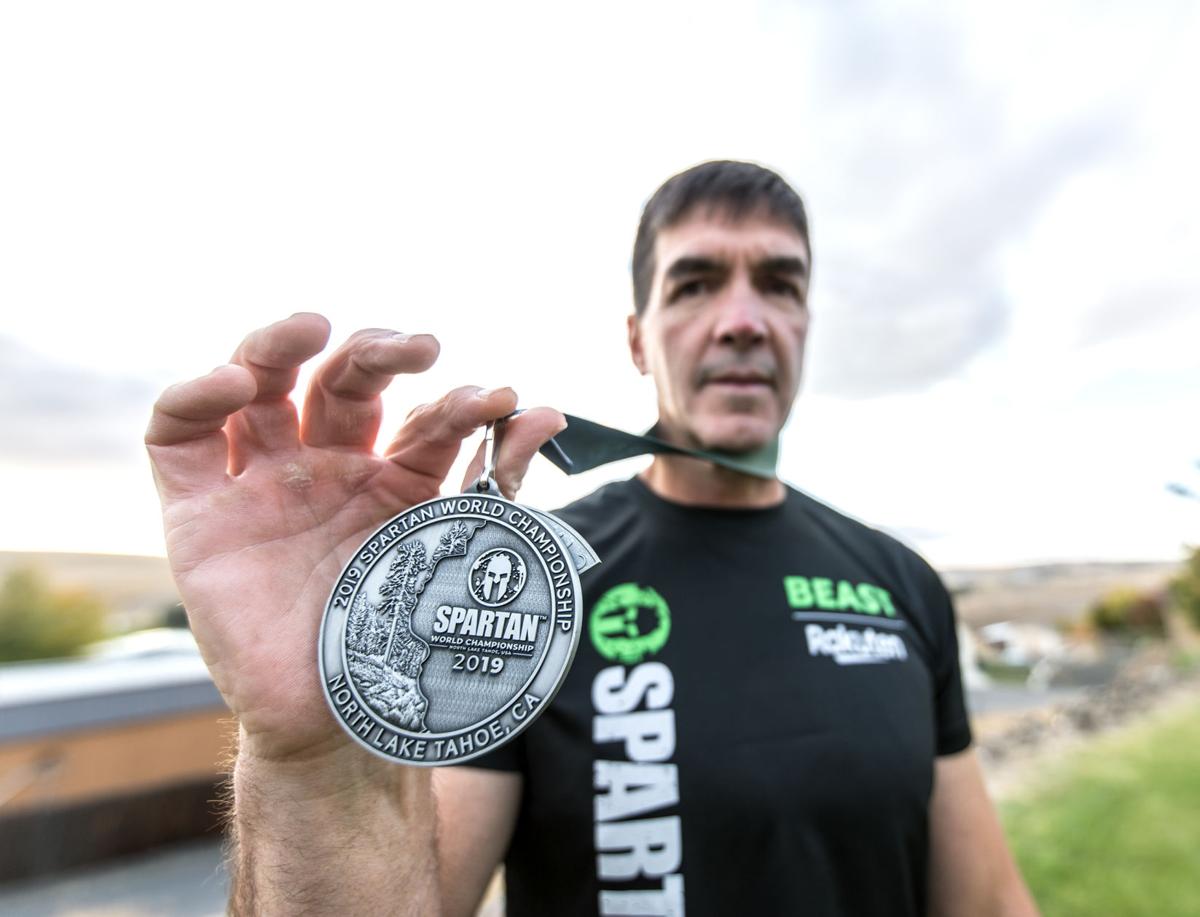 Richard Boyer of Pendleton displays the medal he won in North Lake Tahoe for getting seventh place in the 2019 Spartan World Championships in the 55-59 age group.

Charity Boyer watches her husband, Richard, climb a rope in their home shop in Pendleton as part of his Spartan Race workout.

Richard Boyer of Pendleton displays the medal he won in North Lake Tahoe for getting seventh place in the 2019 Spartan World Championships in the 55-59 age group.

Richard Boyer has always been competitive. He competed in football, basketball and track at Long Creek High School, and was selected to play in the 1982 East-West Shrine Game.

Then life happens — work and family — and the next thing you know, you are are in your mid-50s.

The 55-year-old Pendleton man rediscovered his competitive nature three years ago, when his high school buddy, Doug Girdner of La Grande, encouraged him to train for a Spartan race.

“I love it,” Boyer said. “When I started out, I hadn’t done monkey bars for 30 years, or climbed a rope. We made a training deal in the shop. I carry a 5-gallon pail of rocks up and down the road. The neighbors must think I’m nuts.”

Boyer’s hard work has paid off. He recently placed seventh in the 55-59 age group at the Spartan World Championship in North Lake Tahoe. He finished the 13.8-mile, 37-obstacle course in 4 hours, 24 minutes and 56 seconds.

“Seventh in the world — I’m happy with that,” Boyer said. “In the 55-59 age group, there were guys who beat me who were 54 (entry is based on birthday). I ran with some real youngsters out there.”

Not for the weak

Spartan races combine running (Boyer prefers the term power hike) and a number of obstacles that a competitor must accomplish. If you cannot complete an obstacle, you are taxed with burpees.

The spear throw is the trademark obstacle that embodies the Spartan ethos and spirit, but other obstacles can change from event to event.

At the World Championships, Boyer was challenged with carrying two 80-pound sandbags around the half-pipe (about one-quarter mile), swimming in a cold lake, crossing monkey bars, climbing ropes and crawling under barbed wire, just to name a few.

“There was moaning and groaning carrying those sandbags,” Boyer said. “When we had to swim, we had to put our clothes in a bag and take them with us. My hands were so cold that I couldn’t get my bag sealed and everything got wet. We were at 9,200 feet at the top of the course. It was minus-17 degrees. It was 32 at the bottom, and the wind was blowing. I went to boot camp in Kentucky in December. This was worse.”

Boyer’s favorite obstacle along the route is the rope climb.

“I struggled with that in my first race,” Boyer said. “I’ve gotten better at it and I can rest my legs. What I like about the races, is there are advantages for folks who are taller, leaner, shorter, stronger. Us big guys have a tough time with the ape hangers, and small guys with the 400-pound tire. When you run, the less weight the better.”

Boyer said he isn’t fond of the swim, but Lake Tahoe was the first time he has had to do it. For the most part, the box is his least favorite. It is a new obstacle for 2019.

The box is an 8-foot piece of plywood with a rope. The wall is faced with a slick surface, and has no top edge to grab.

“You are scrambling to get foot placement,” Boyer said. “I have failed it. When you fail, it is 30 burpees.”

Boyer and Girdner used to train together when they were on the high school track team in Long Creek.

“We used to run the highway to the forest,” Boyer said. “That was 1980. Here we are 39 years later competing in these races.”

Boyer, who works at J&J Snack Foods in Weston, has a few obstacles set up at his house. He also goes to La Grande to train with Girdner, who is a little more extreme, and has an array of obstacles to practice on.

“He lives at the base of Mt. Emily, and he runs to the top three days a week when he is training,” Boyer said. “I haven’t done that with him. I run the Tollgate Highway. I get in 8 to 10 miles on my lunch hour.”

He also runs from his house to the Pilot Rock city limits, which is 13.1 miles.

“It wasn’t too bad, until you skip a day,” Boyer said of the burpees.

Boyer’s wife, Charity, is his biggest cheerleader, but his kids Joshua, 22, and Jenny, 14, have joined the Spartan craze.

“Jenny (an eighth-grader at Sunridge Middle School) has Down syndrome, but she goes through the whole thing,” Boyer said. “She enjoys it.”

Joshua is a student at Utah State University.

“He has done races the past couple of years,” Boyer said. “He did an Ultra Beast in Colorado in August.”

Boyer has done a handful of races, including one in Seattle in early September, but said he will take a break until June when he will participate in the race in Payette, Idaho.