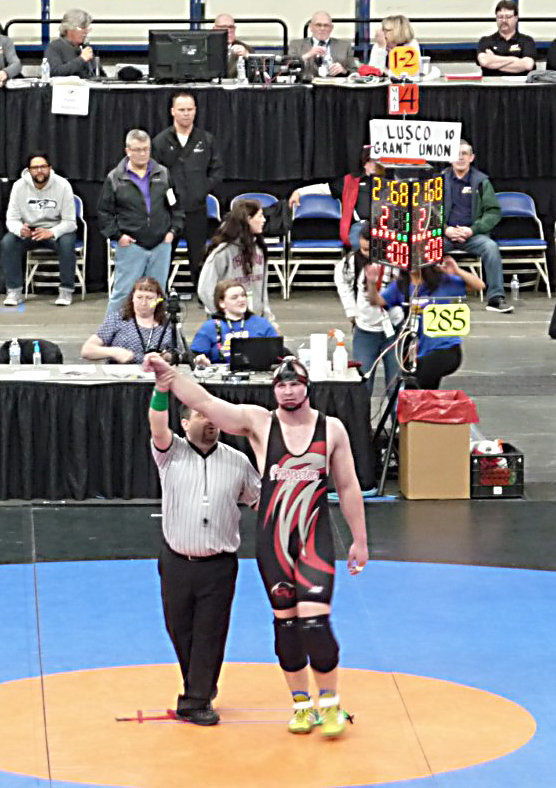 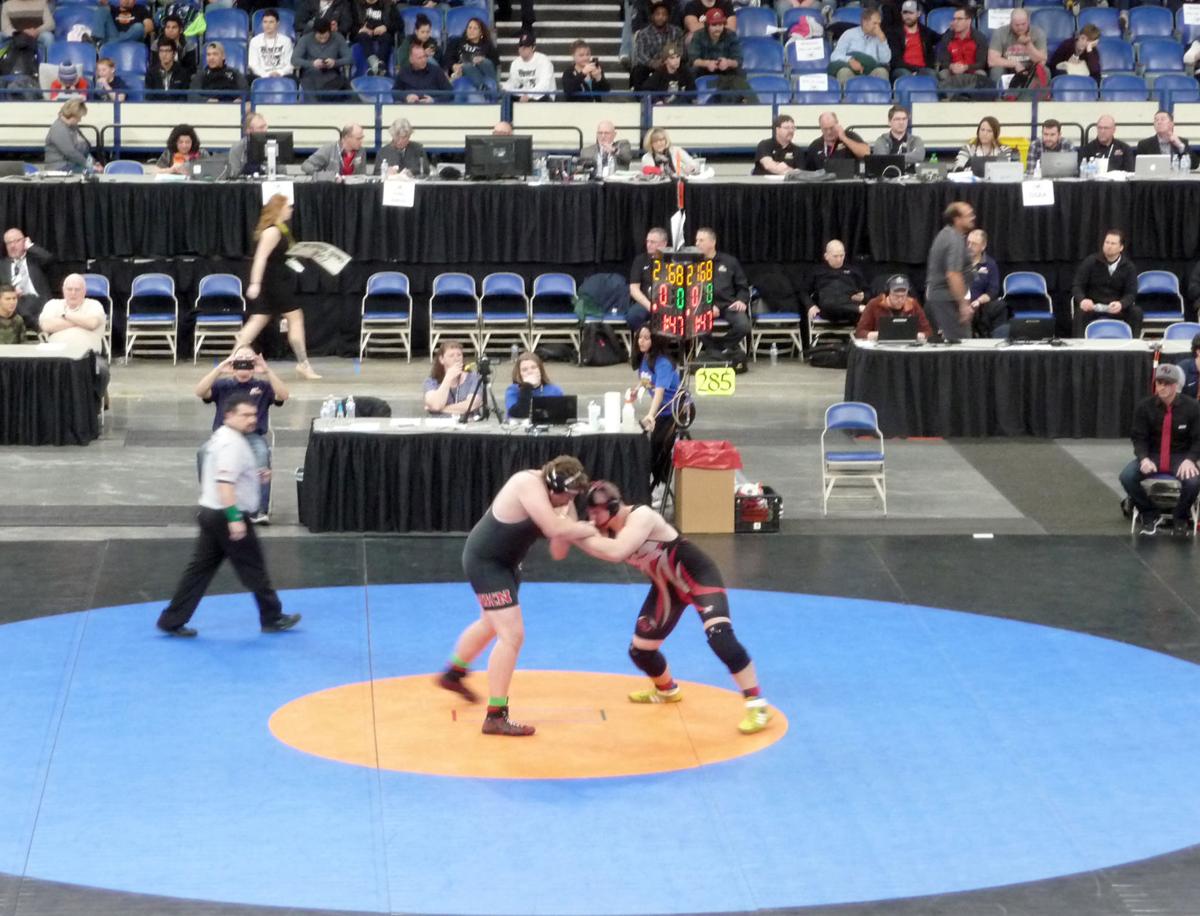 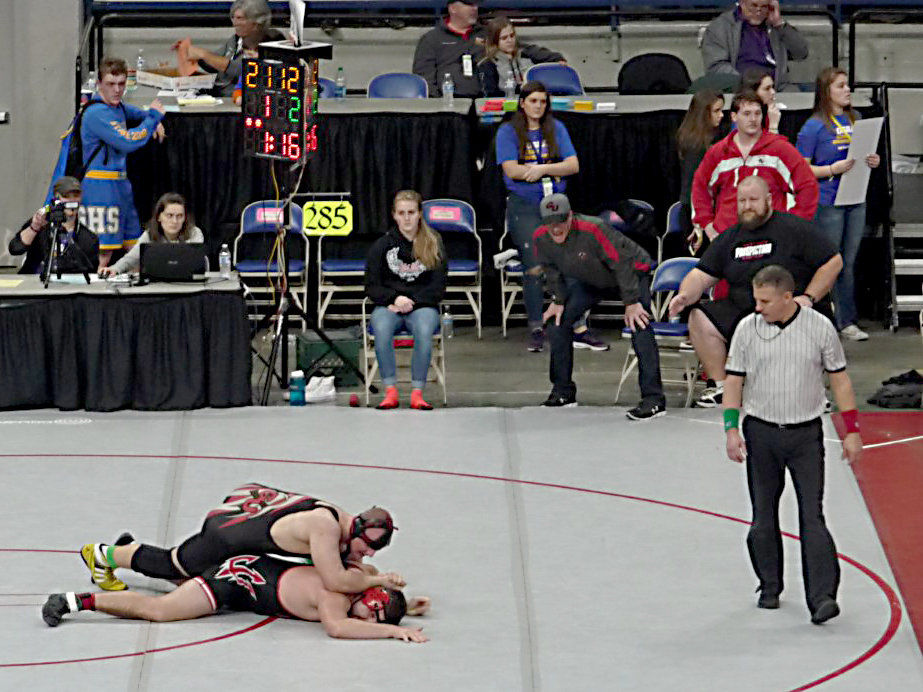 Contributed photo/Angie LuscoDrew Lusco (285) of Grant Union wrestles at the 2A state wrestling championships in Portland. Lusco won the title. 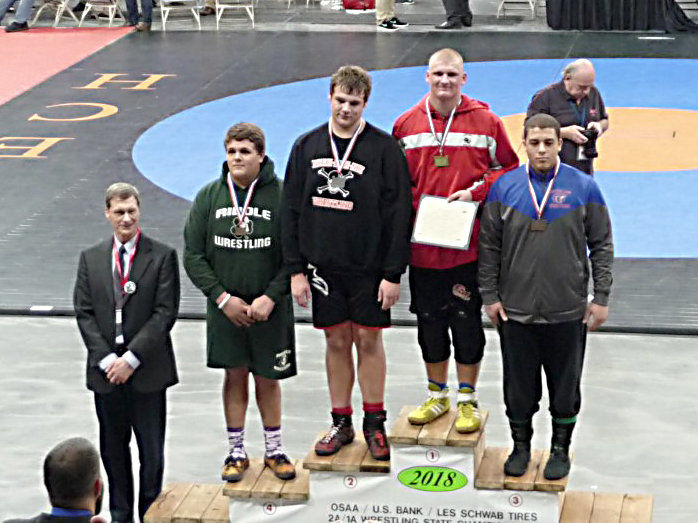 Contributed photo/Angie Lusco Grant Union's Drew Lusco stands atop the podium for the 285-pound weight class at the 2A state wrestling tournament in Portland. 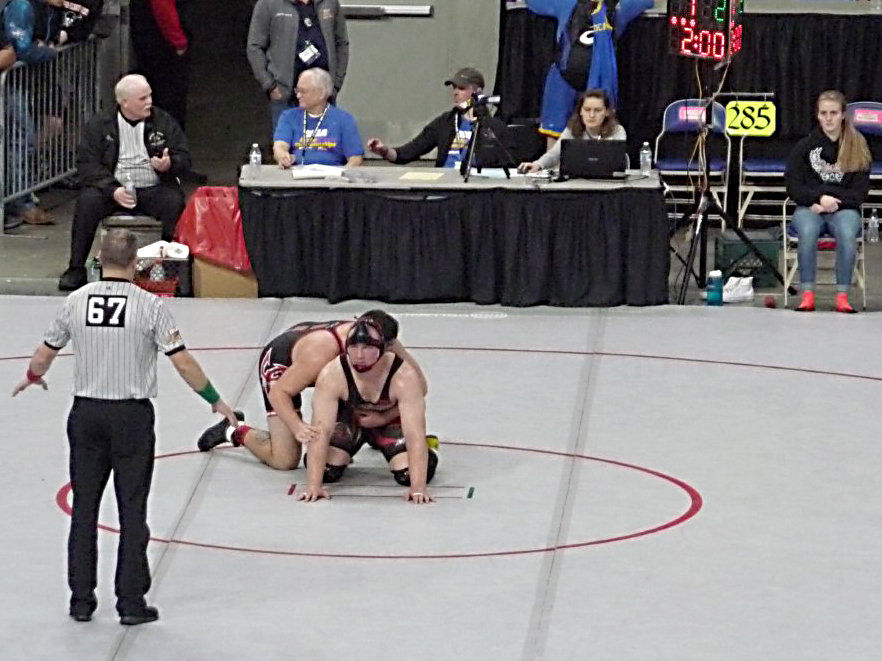 Contributed photo/Angie LuscoDrew Lusco (285) of Grant Union wrestles at the 2A state wrestling championships in Portland. Lusco won the title.

Contributed photo/Angie Lusco Grant Union's Drew Lusco stands atop the podium for the 285-pound weight class at the 2A state wrestling tournament in Portland.

This was a return trip for Lusco who placed fourth at state last year at 220 pounds.

“Drew wrestled well and won his first match with a quick pin,” said Grant Union head coach Andy Lusco. “In the semifinals, he wrestled a kid from Lowell (Thomas Talamanthes-Ward) who was last year’s second-place finisher.”

In the finals, Drew wrestled junior Travis Jonsson of Neah-Kah-Nie. It was the third time they faced off this season, and Drew won the championship in triple overtime.

“That was a tough match,” coach Lusco said. “Both are really physical kids. (Drew) rode the kid out in the third round — had 30 seconds to escape and couldn’t.”

Drew, who was also champion at the Special District 4 meet, said it was a tough final match, and it felt good to reach his goals.

“The hope is that I can pull it off two more times,” the sophomore said. “It’s great to be a part of such a great group of guys.”

Grant Union senior Elijah Humbird, who won the district championship wrestling at 220 pounds, was at the state championship for his first time.

“Humbird has come a long way,” Lusco said. “To be a district champion and go on to state is a really great accomplishment. Your first year at state is difficult because it’s new, and it’s a big meet.”

Second-time state qualifier, senior Toby Boatwright (285), who finished second at the district meet to Drew Lusco, lost the state quarterfinals to the No. 1 seed and then lost to the wrestler who finished fourth.

“We were pretty tickled he made as much progress as he did, having wrestled only two years,” said coach Lusco.

He said having Drew Lusco, Humbird and Boatwright wrestle each other in practice was an asset.

“The three of them made each other better, fast,” the coach said. “No surprise, a lot of Drew’s success has to do with those partners, Dillon Maley (who was injured earlier in the season) included — all those kids make each other better.”

Coach Lusco said Moore is about 20 pounds lighter than everyone he wrestles and has a “bright future.”

Sheedy won a match in the consolation quarterfinals, then lost in the semifinals to the wrestler who finished fourth.

The coach said Hodge entered the state competition unseeded and won his first match against the No. 4 seed.

“He’s a skilled wrestler, and he did a good job,” he said.

Hodge, competing with an arm injury, lost his next match in the semifinals to the first-place wrestler.

“It was a new experience, and there were a lot of people there,” Hodge said. “I didn’t do as well as I wanted to, but I have two more years.”

Coach Lusco said he looks forward to seeing the younger state qualifiers return next season, as well as others who have been working hard on the team.

“We’re pretty excited to see them progress,” he said.

NAU's Chris Ball on returning to Tucson, his relationship with Jedd Fisch and recruiting Will Plummer

What makes OU QB Spencer Rattler so dangerous? And how do the Huskers go about slowing him?