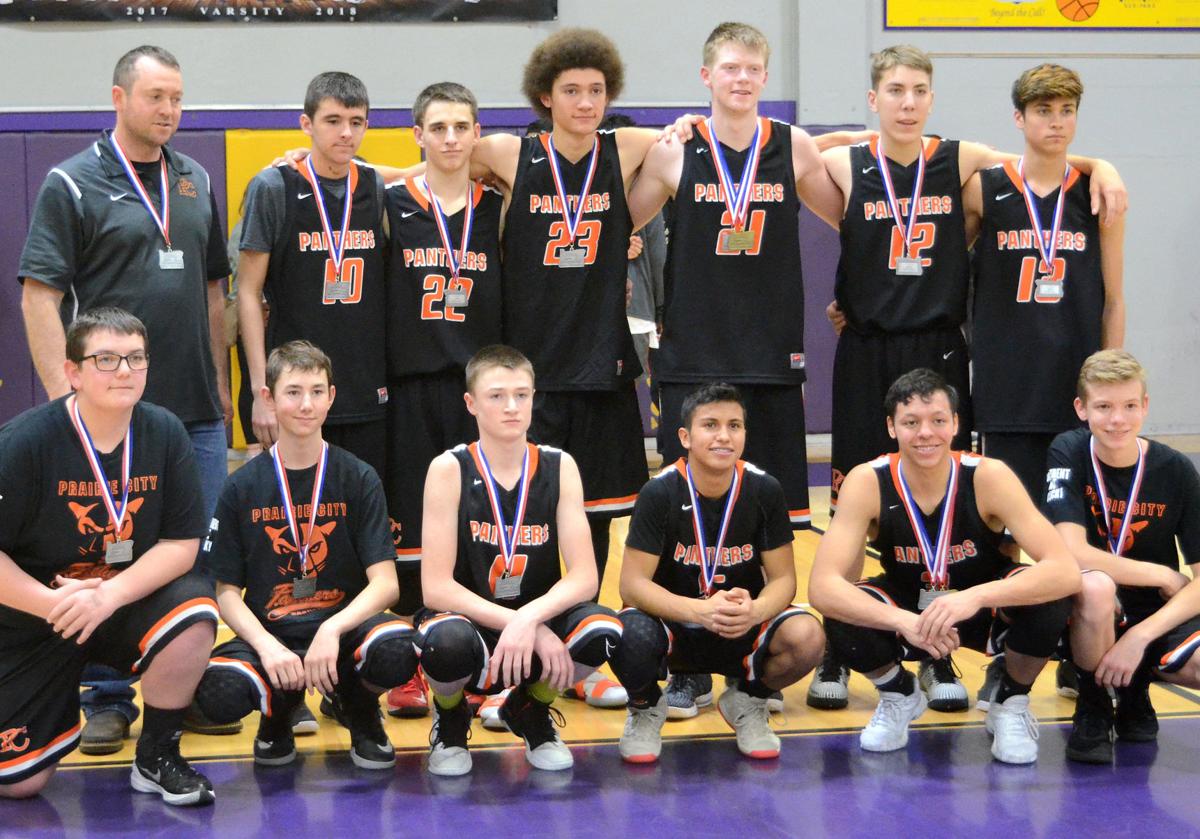 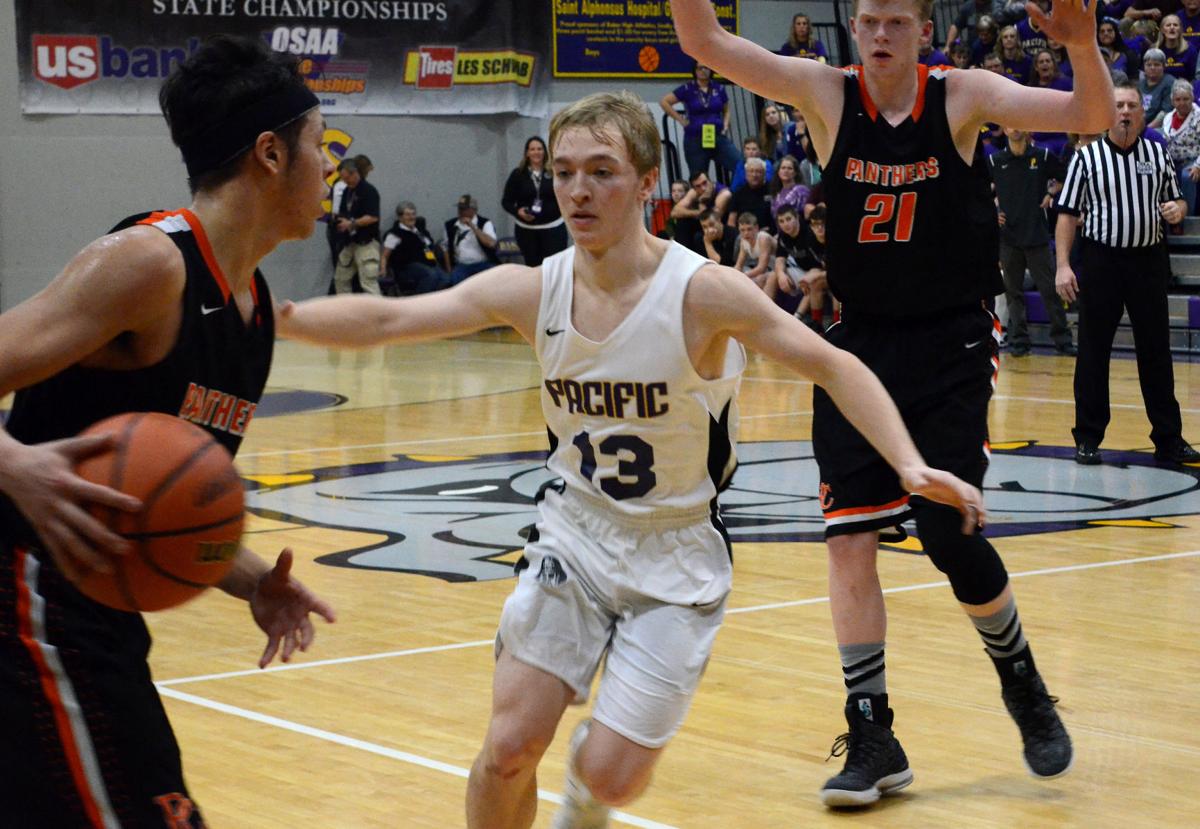 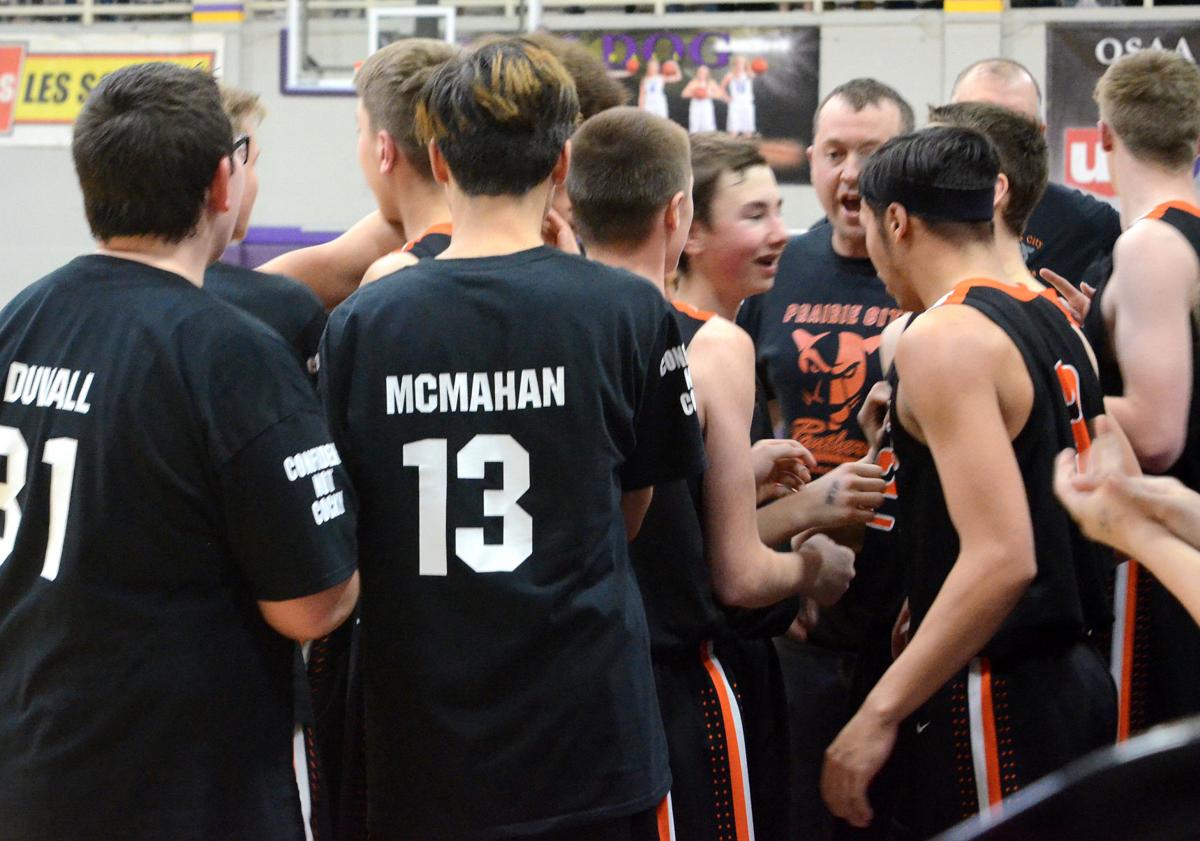 The Prairie City Panthers gather for a timeout with head coach Sam Workman. 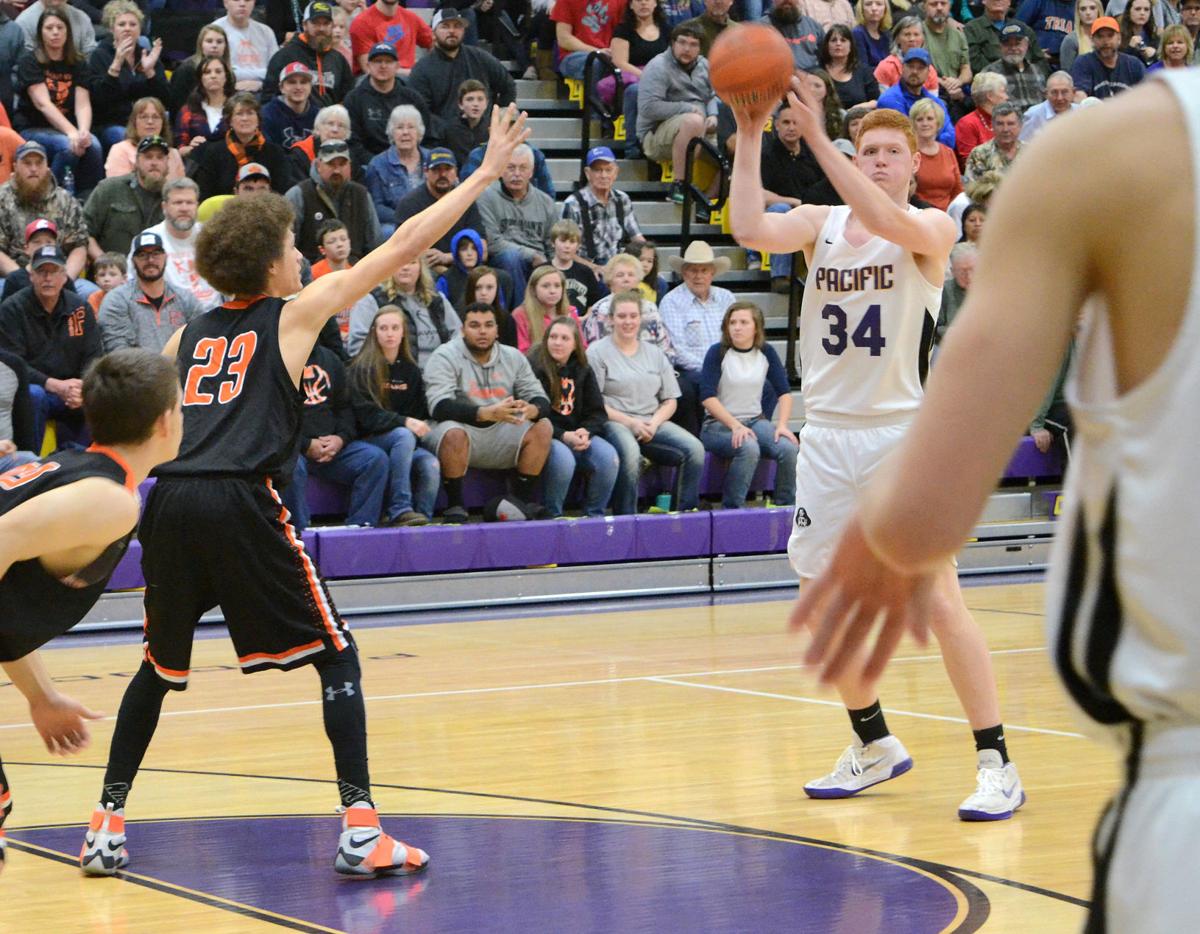 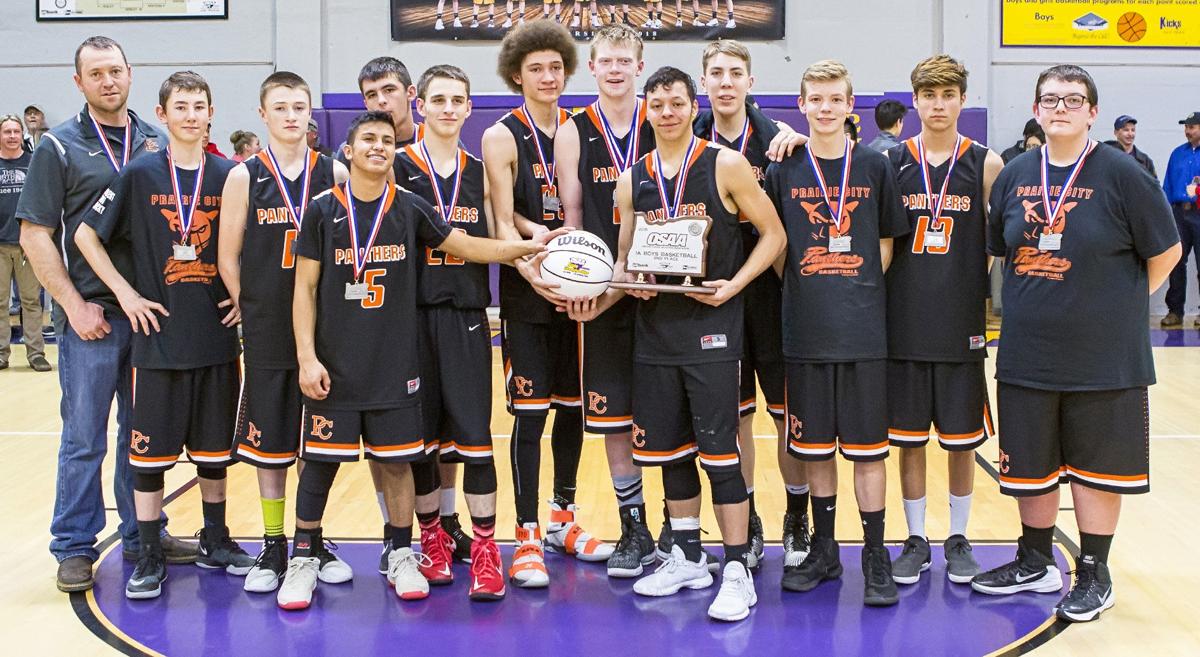 The Prairie City boys basketball team poses with its second-place trophy after the OSAA 1A Boys Basketball State Championships in Baker City Saturday. 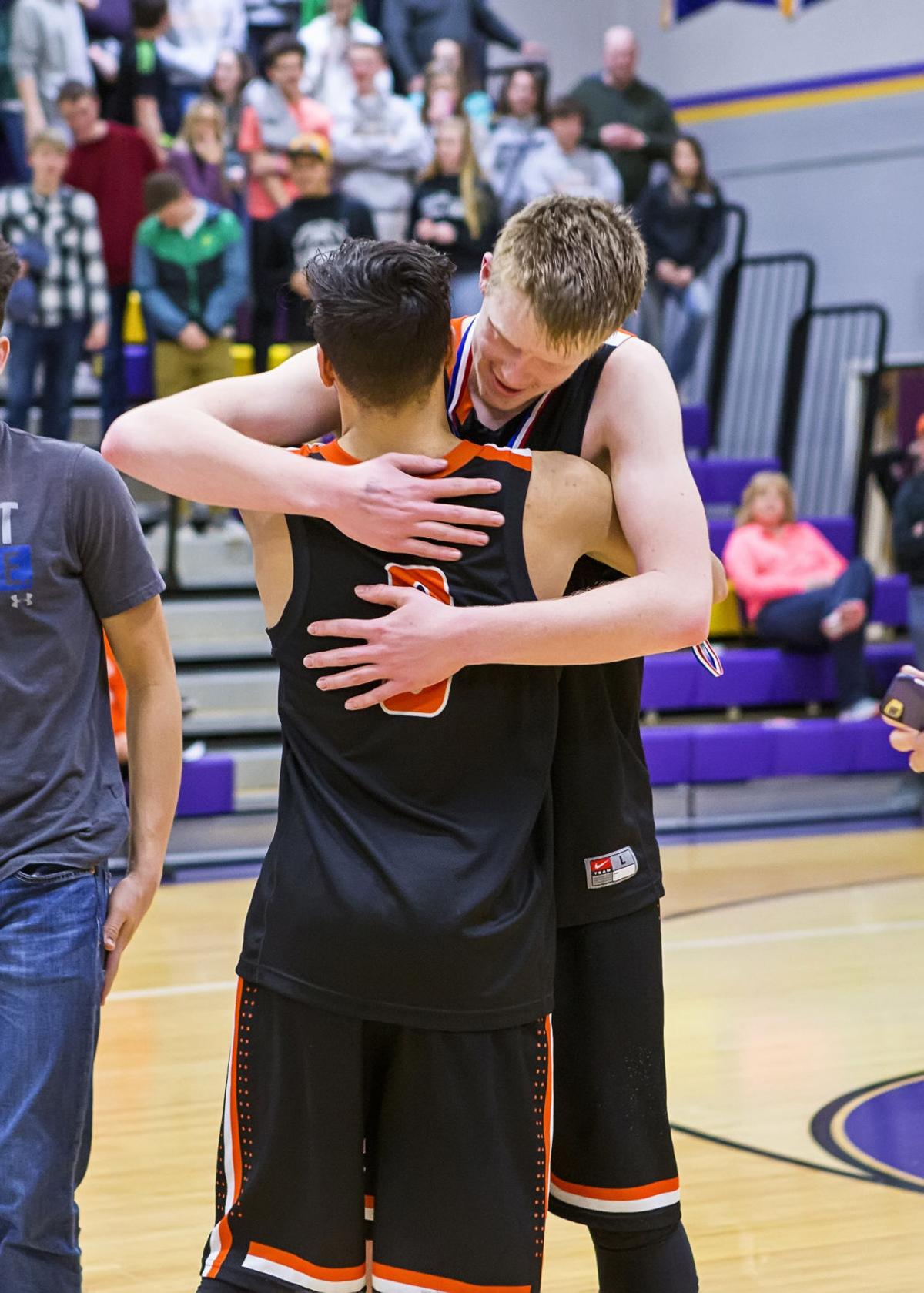 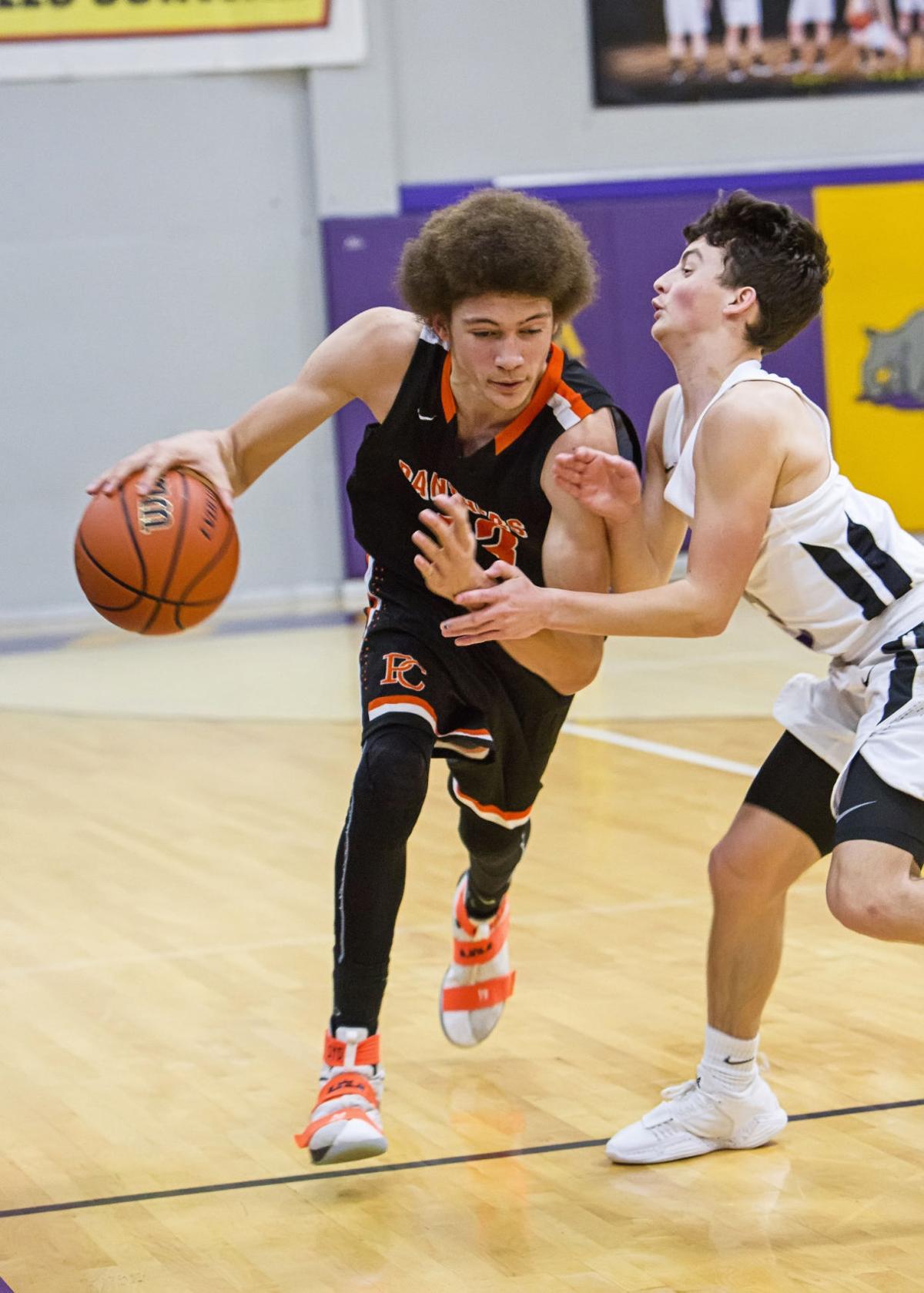 Prairie City's Syd Holman drives the ball against a Pacific opponent in the finals at the state tournament.

The Prairie City Panthers gather for a timeout with head coach Sam Workman.

The Prairie City boys basketball team poses with its second-place trophy after the OSAA 1A Boys Basketball State Championships in Baker City Saturday.

Prairie City's Syd Holman drives the ball against a Pacific opponent in the finals at the state tournament.

The Prairie City Panther boys are celebrating their best finish at the OSAA 1A Basketball State Championships in years, placing second, with the Pacific Pirates taking the championship title Saturday with a 73-50 win.

The Panthers last competed at state 20 years ago, and finished second 23 years ago.

Sam Workman, in his first year as Prairie City head coach, said the team had great expectations this season.

“They grew stronger, and maybe they wanted it a little bit more,” he said. “They wanted to see how far they could go, and the younger kids stepped up this year when they needed to.”

On their way to the final game, Prairie City beat Sherman 68-53 in the quarterfinals, followed by a 61-53 defeat of Jordan Valley in the semifinals.

After defeating Jordan Valley, Workman said he told the team in the final minutes to “take care of the ball and intensity — keep it up and play smart.”

Panther Dorran Wilson said beating the Mustangs was great on their way to the championship.

“It was rough around the edges, but we got it done, and I’m proud of these guys,” he said.

It was the third time Prairie City met up with Jordan Valley, having beat them once in the regular season and again at the first-round state playoff.

Preparing for the championship, Workman said the team would have to “go at it like their hair is on fire.”

Panther Syd Holman launched the tipoff to his team against Pacific, with Wilson starting off Prairie City’s scoring with a 3-pointer. Holman added a bucket for a 5-0 lead. Then Pacific took action, moving ahead 16-5 before Prairie City would again find the basket.

Wilson added 3 more points from the free-throw line, then scored twice in the final seconds, including a layup off his steal, and Pacific led 25-12 in the first quarter.

Pirates Colton Keeler, Justin Hall and Jack Lehnherr scored most of Pacific’s points in the quarter.

Prairie City was able to cash in on some defensive rebounds and a steal in the third, and Holman blocked one of John Keeler’s jump shots.

Prairie City subbed in some younger players in the final minute of the fourth, and Brandon Horrell brought down a defensive rebound and Jayden Winegar scored 2 points for the Panthers in the final 30 seconds of the game.

Wilson was named Prairie City’s Player of the Game with 14 points.

Jack Lehnherr, at 6-foot-9, was a force for Pacific and was Player of the Game for the Pirates with 12 points.

“That guy was tough and could play ball — he wasn’t just big,” Workman said, adding, “It was a very good team. We knew we were going to have trouble with them, and we did.”

Workman said his team had a successful year.

“I was thinking we were going to be contenders all year,” he said. “They played together well, and it was a fun year.”

Workman said teamwork continued to make the difference this year.

“They just work well together,” he said. “The older kids are already on the same page — they already know where the other guy’s going to be, and Dorran, he knows where they’re going to be before they get there. He plays very smart basketball.”

Wilson, as the sole Panther senior, will leave big shoes to fill, the coach said, but he added the team is only going to be better, and bigger.

Six out of the 12 team members are freshmen, and Workman said he expected them to step up this year, and they did — “especially Declan Zweygardt, Jojari Field and Jayden Winegar.”

Burke, Holman and Charles Lawrence will return as seniors next season.

Burke said the state championship was an “intense experience.” He said beating Sherman, the team that won the state title last year, was especially rewarding.

He added, “We wanted it bad, and we had to push through, and we knew we could do it. We were composed, ready to do it and confident in ourselves.”

Field said it was great to play against seasoned teams and having a big crowd to cheer them on.

“I feel like with this great experience and that next year, when we play against good teams, I won’t be as nervous, and I’ll be more prepared,” he said. “I’m really proud of all my team members this year, and I know we’ll be right back at it next year.”