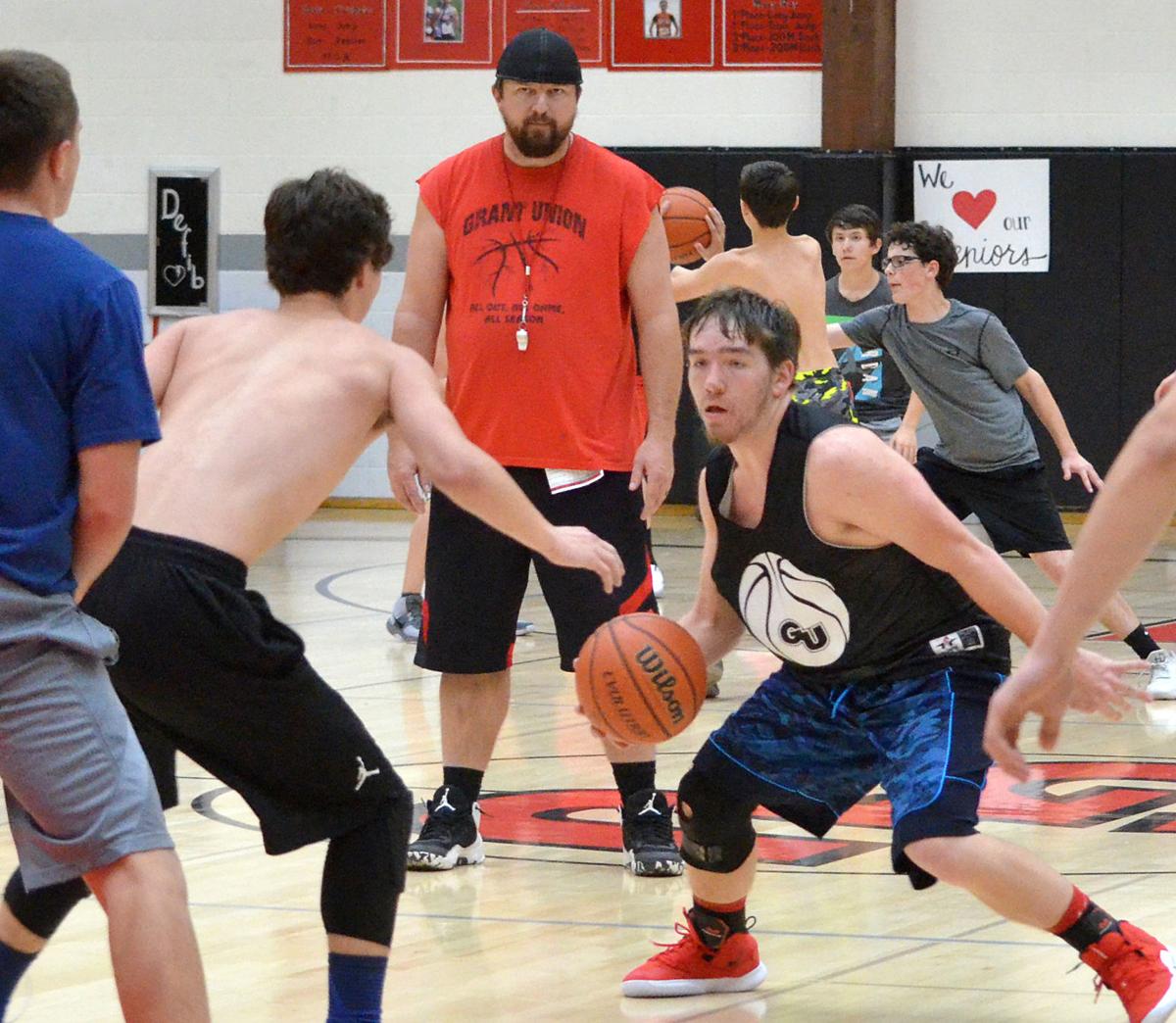 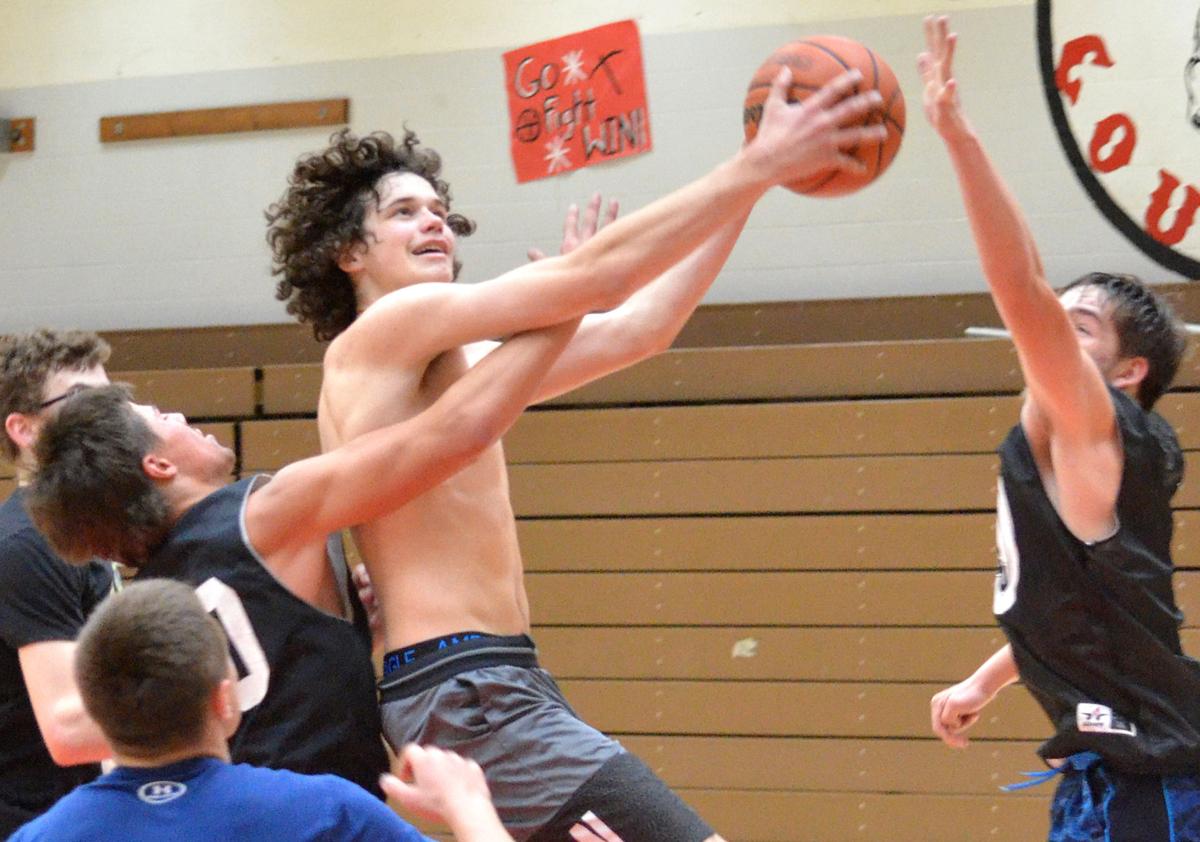 The Eagle/Angel Carpenter Grant Union Prospector Tristan Morris is on his way up to score with pressure from Warner Robertson, left, and Duane Stokes, right. 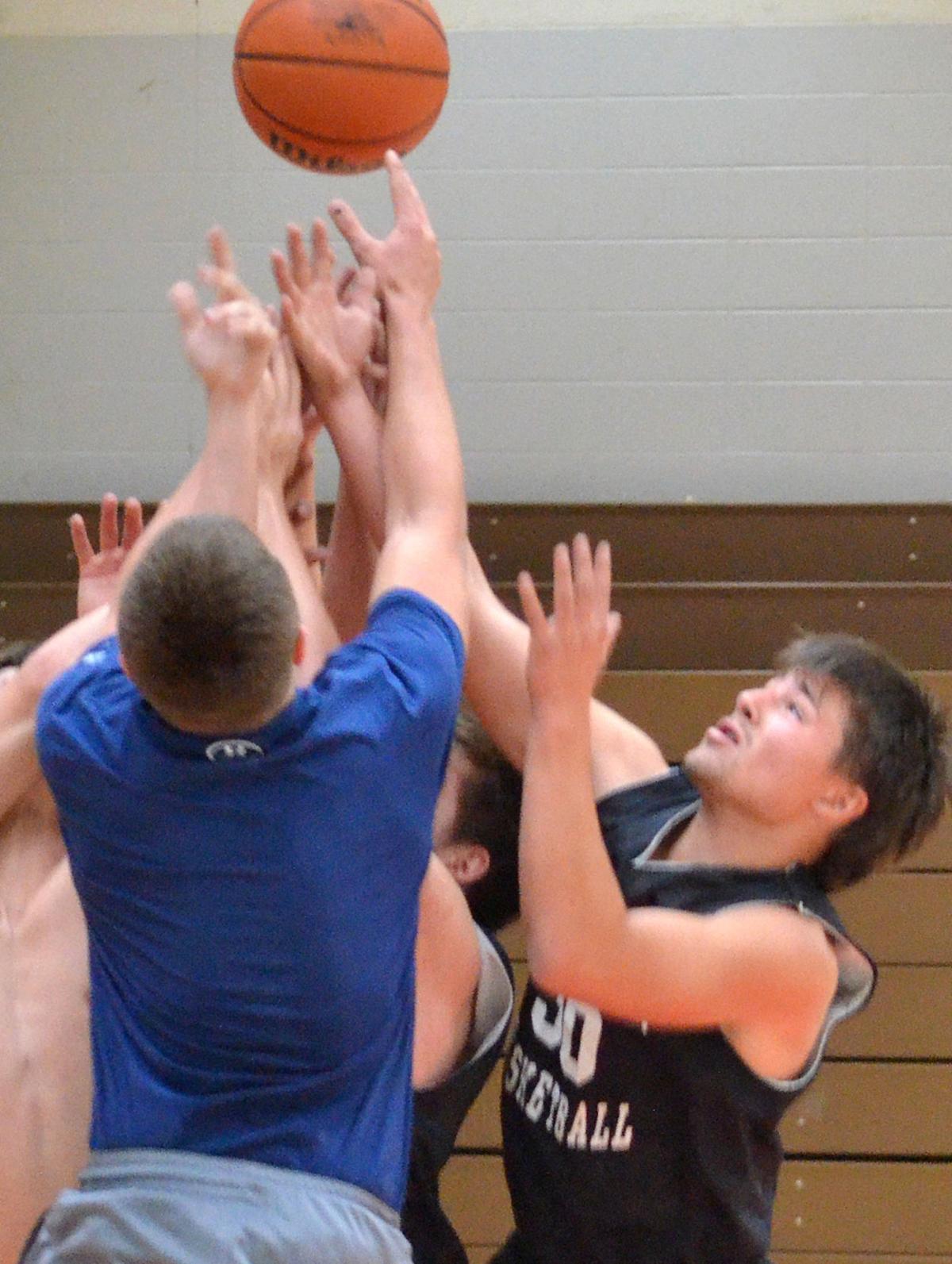 The Eagle/Angel Carpenter Grant Union Prospector Warner Robertson, right, reaches for a rebound with teammates in a scrimmage at practice. 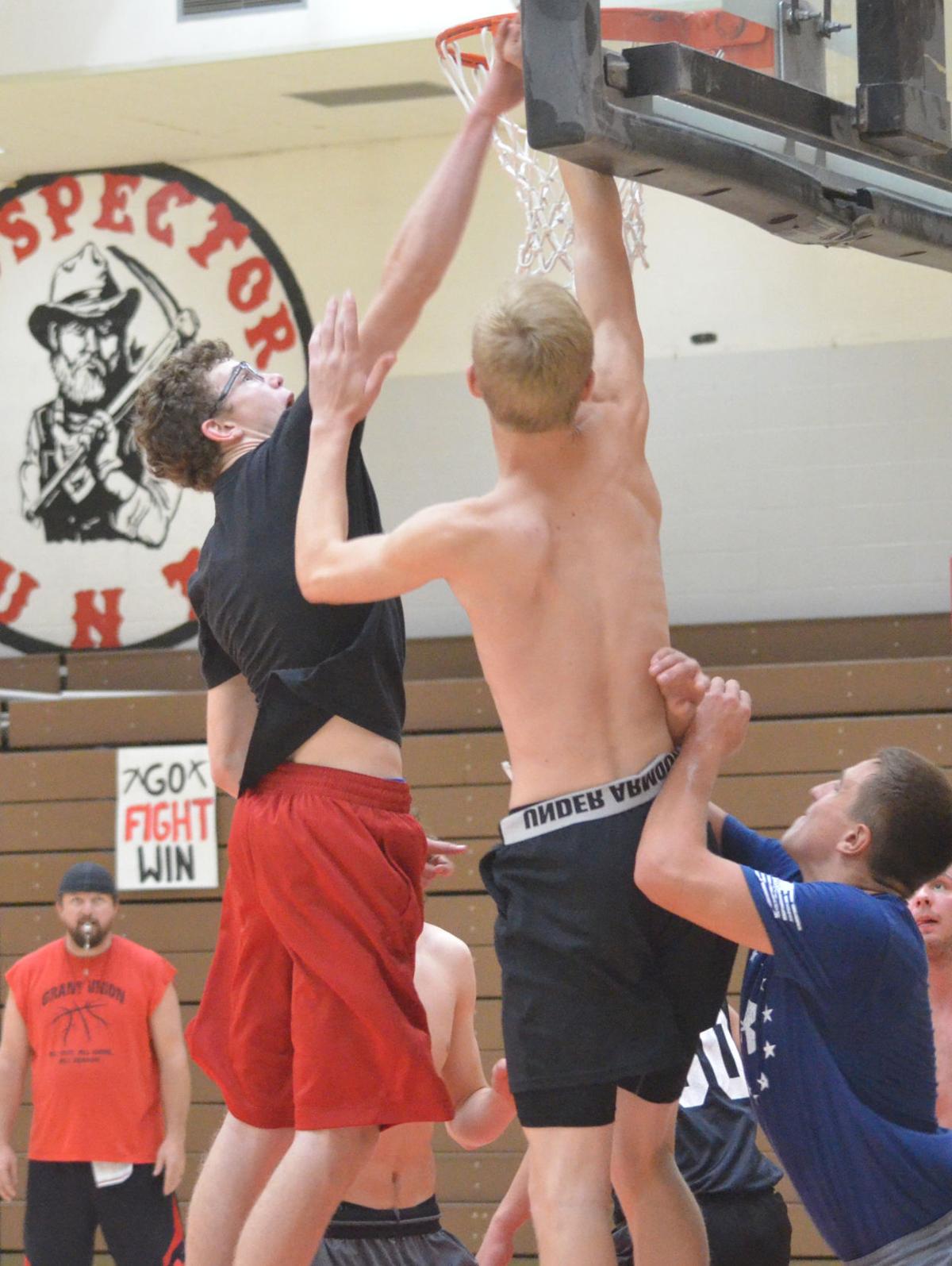 The Eagle/Angel Carpenter Grant Union Prospector Mason Morris flies up to score past the reach of Mason Gerry, as Peyton Neault, at right gives a shove. 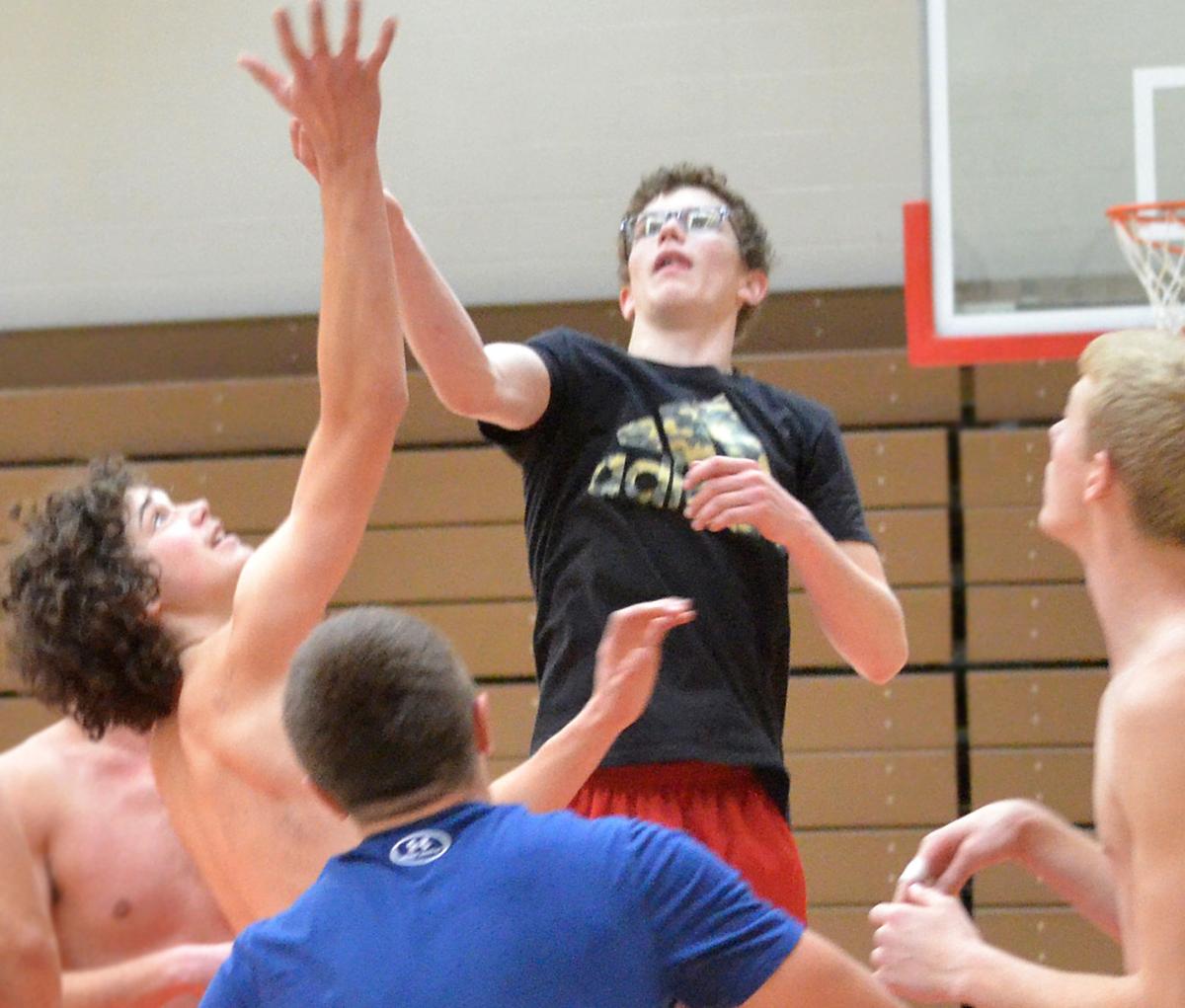 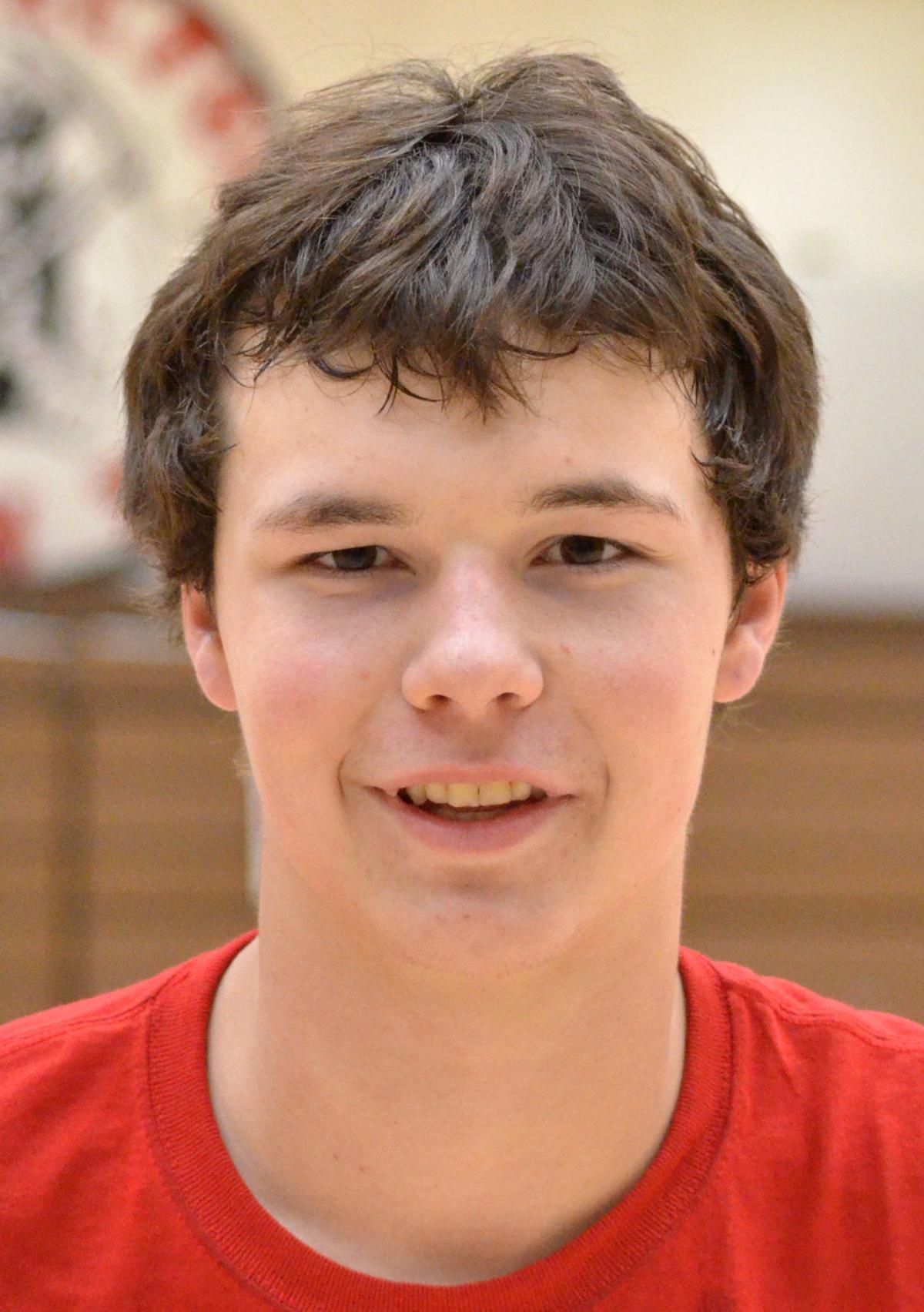 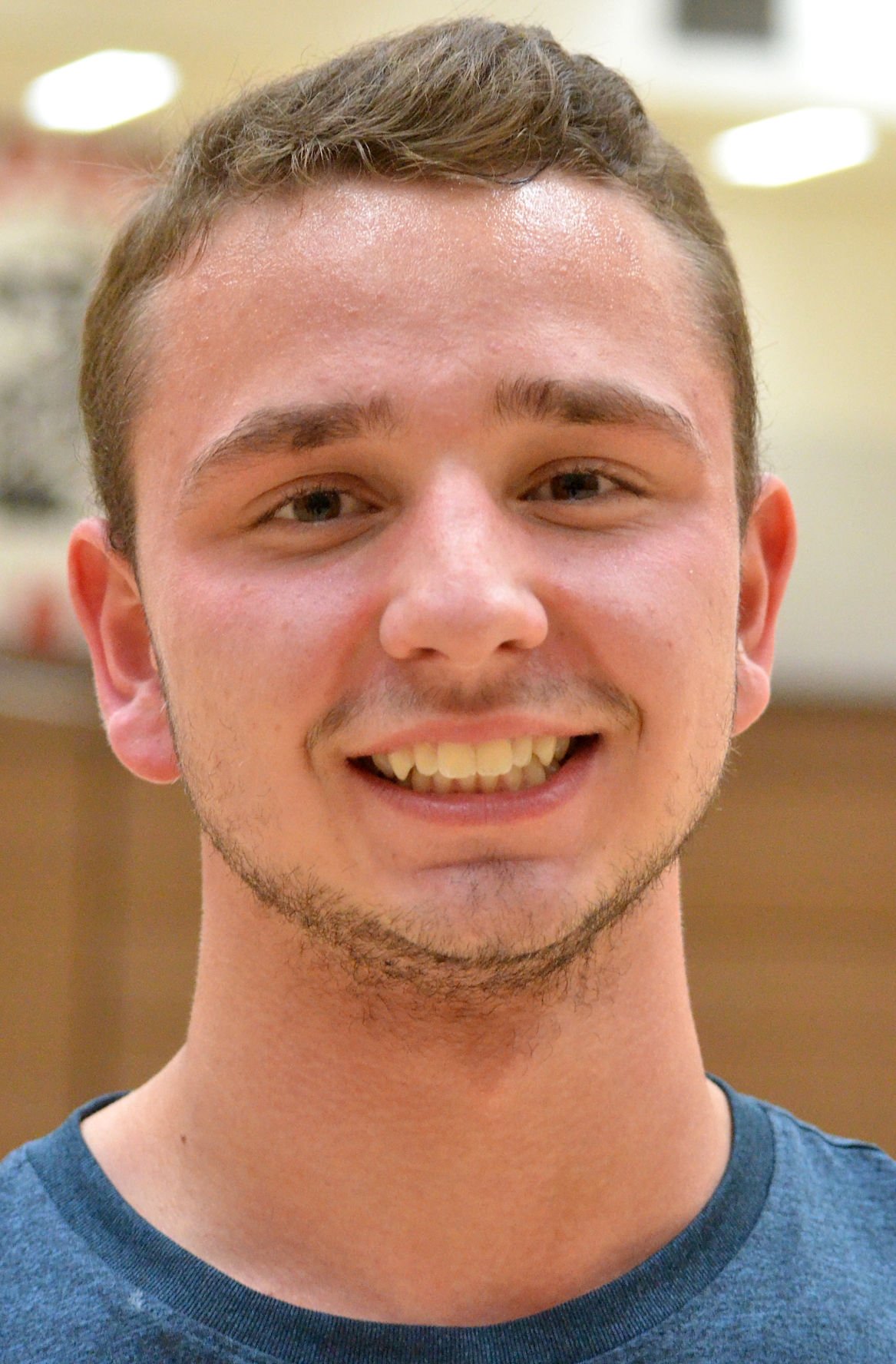 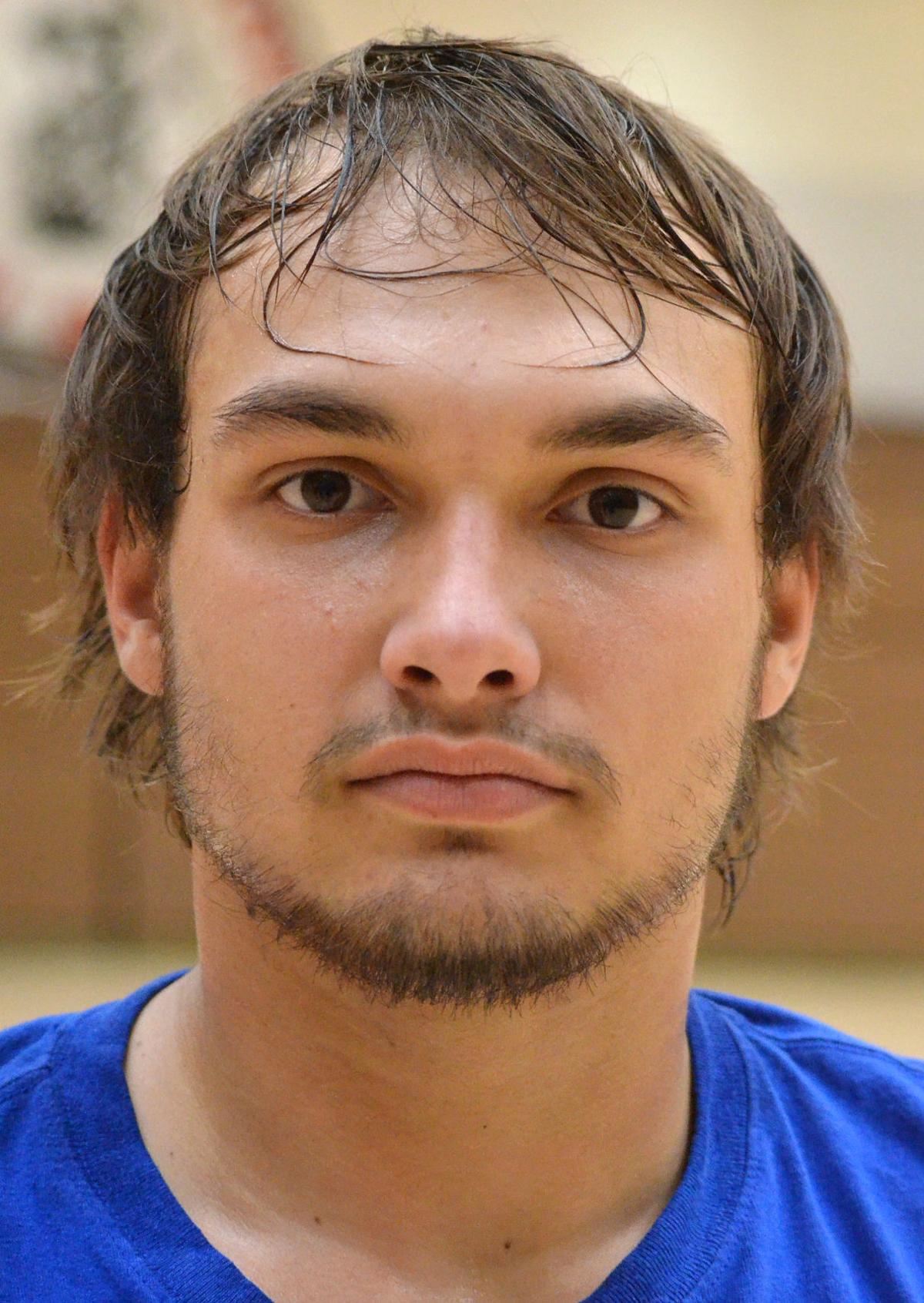 After graduating five senior starters, it may seem like a new beginning for the 2A Grant Union Prospector boys basketball team, but there are talented players moving into those positions, head coach Kelsy Wright said — the building blocks of an exceptional team.

“Last year, we had great talent, and everyone played together well,” Wright said. “That’s what we’re going for this year.”

The Prospectors were league champions last season — their first league win since 1990. They also earned the district title, then landed in sixth place at the OSAA Boys Basketball State Championship in March.

Besides the five graduating seniors, two varsity players, Kellen Shelley and Cole Deiter, transferred out to different schools. Even so, there are three more Prospector players this season than last.

“It’s a bigger group than we’ve had for a long time,” Wright said.

The coach said he expects Vaughan, who’s been on the team for four years, to contribute greatly to the group.

“He knows how we like the game, and he’s going to help everyone else out,” Wright said. “He’s going to step up and be a leader.”

He said Elliott and junior Warner Robertson are quick to the ball and will bring a lot of energy and excitement to the game.

“They love to get on the floor for loose balls, sacrificing their body,” Wright said.

He said sophomore Devon Stokes will likely be one of his starters.

“He has a great IQ for basketball and shoots the ball extremely well,” the coach said.

He said junior Mason Gerry and sophomore Peyton Neault will be their “big guys,” and they’ll look to them for big defensive plays and rebounding.

New to the team, junior Tristan Morris and freshman Mason Morris, who are brothers, are expected to bring a lot to the team. The pair transferred to Grant Union from Pendleton this school year, and both are great athletes, Wright said.

In addition to both brothers playing basketball and baseball in Pendleton, last summer Mason Morris qualified for the National Junior Olympics after placing first in the triple jump and second in the long jump at a regional meet, working with Grant Union head track and field coach Sonna Smith.

Grant Union is in the Blue Mountain Conference this season and will face Enterprise, Heppner, Pilot Rock, Stanfield, Union and Weston-McEwen.

Wright said he expects Heppner, which has tall players and talented shooting guards, will be a tough opponent.

“I think that’s probably going to be the team to look for, and Union has talented freshmen returning,” he said.

He noted that Enterprise, Pilot Rock and Stanfield have lost players.

Grant Union is in their third week of practice, and the players and coaches are optimistic for the season.

“As long as we play together and work as a team, we’ll do pretty good this year,” Vaughan said. He said he’s hopeful for another run at state.

“We have a lot of young talented kids this year, and we should be all right,” he said.

Elliott said their success will depend a lot on mental attitude.

“I think this team has a great work ethic, and if we play smart, I think we can do some pretty great things this year,” he said.

“There’s a lot of heart and guys who love the game of basketball,” he said.

He said their No. 1 goal is to return to win league and the district title.

“The way to get there is hard work and dedication, and playing together,” he said. “I believe we have an amazing, talented group of guys.”

Garrett Crall, Logan Harris return to give Wyoming 'huge lift' in the trenches