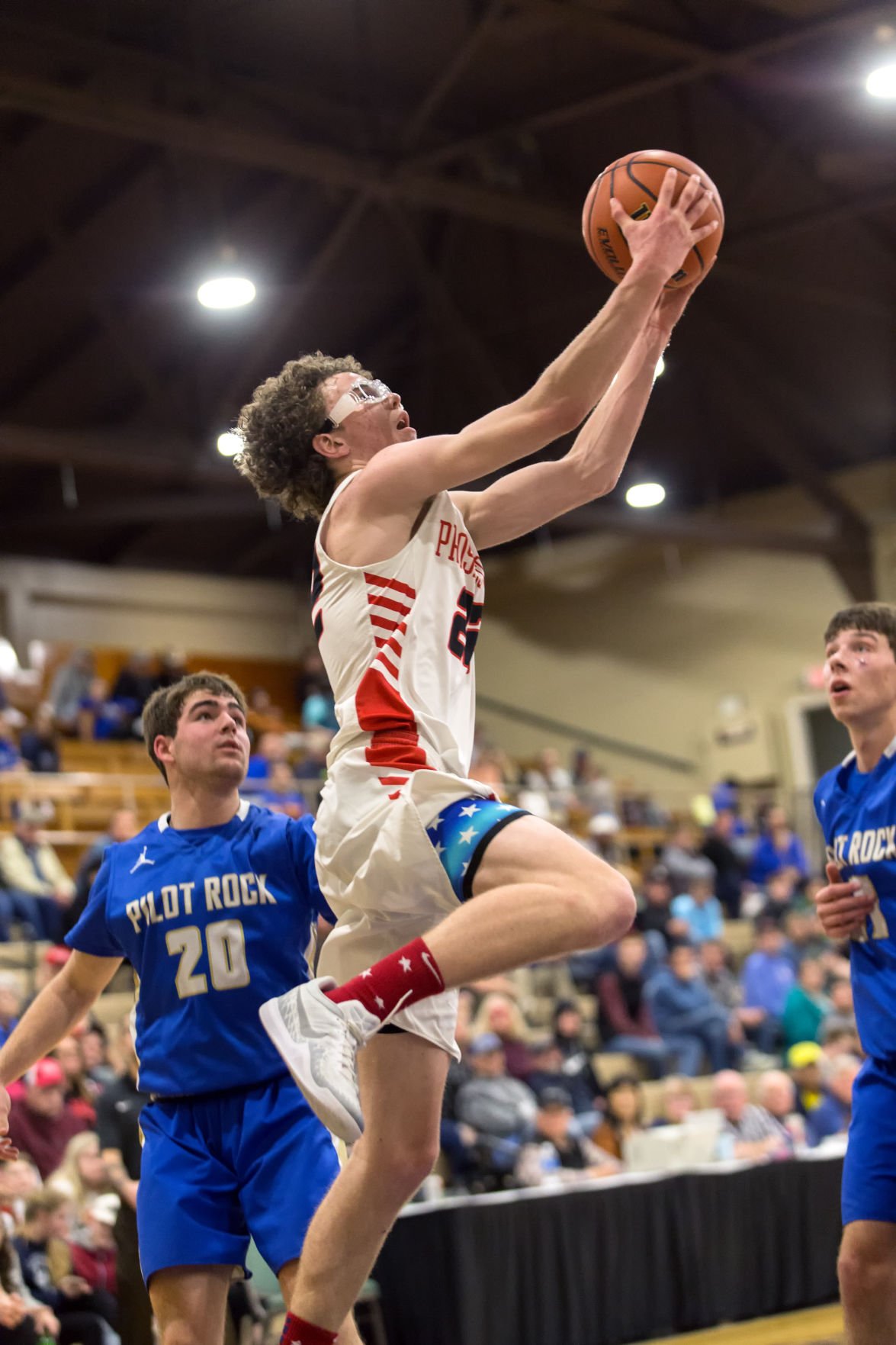 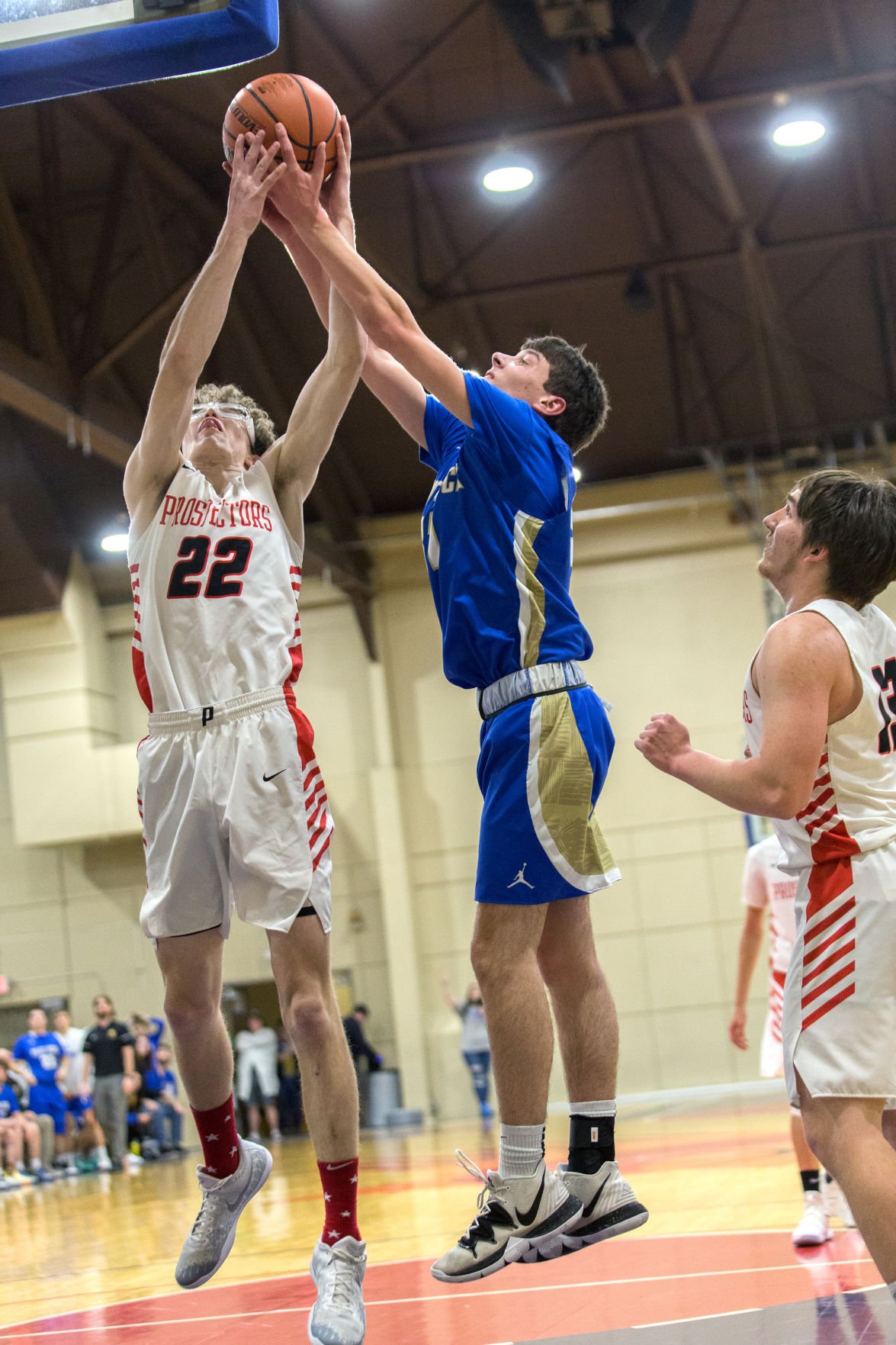 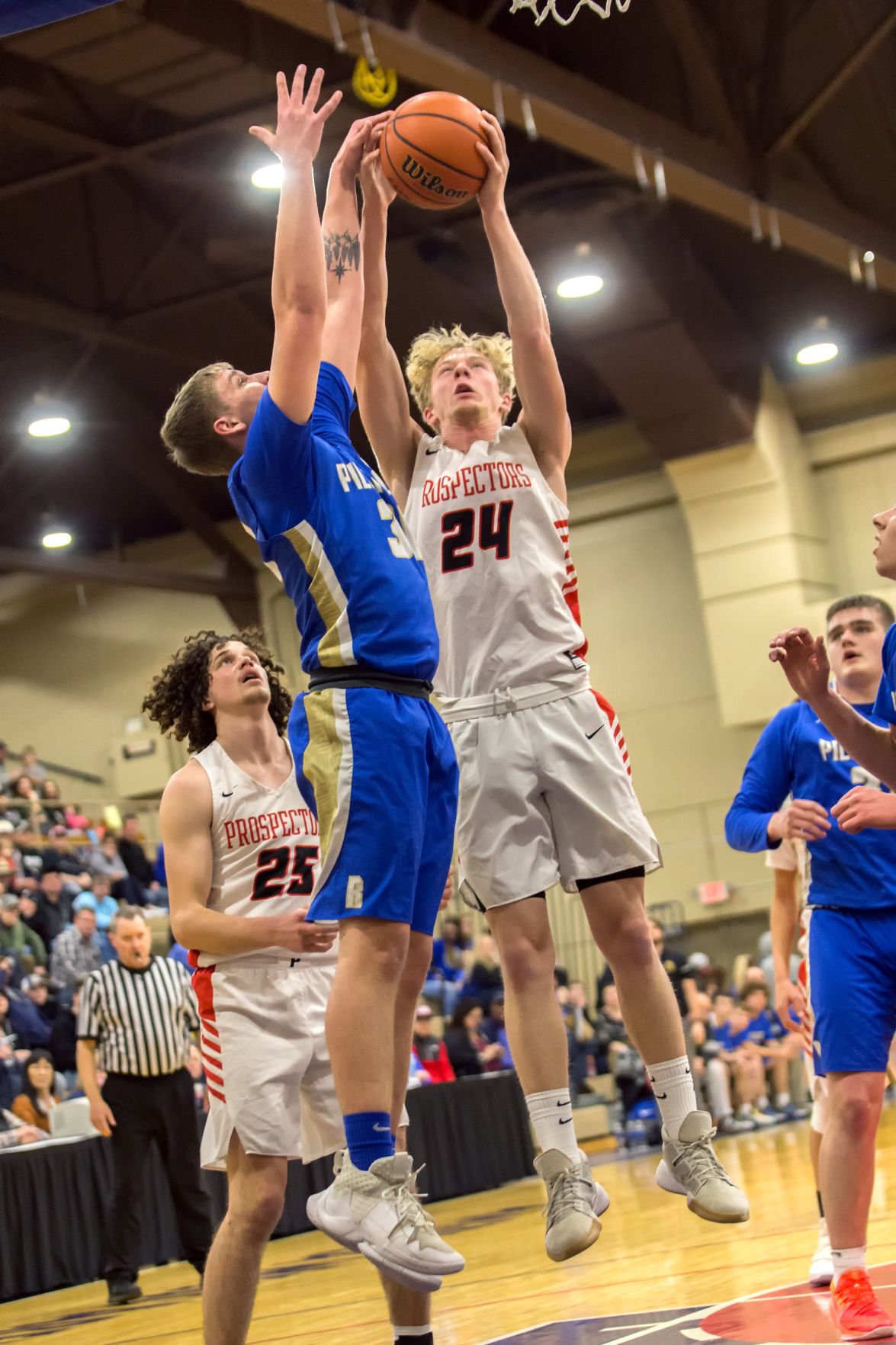 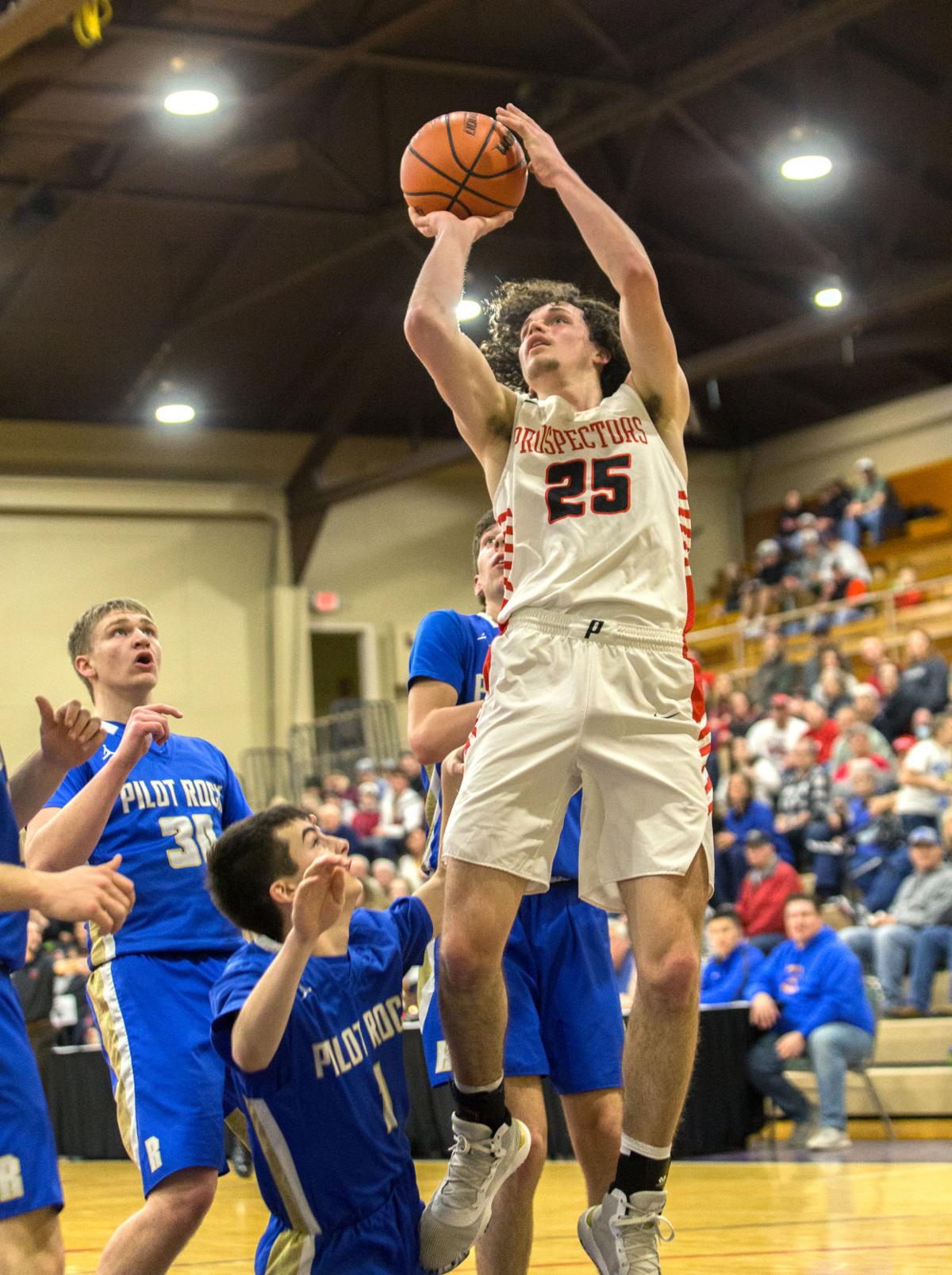 Tristan Morris of Grant Union goes up for a shot during Saturday’s boys Blue Mountain Conference championship game at the Pendleton Convention Center. 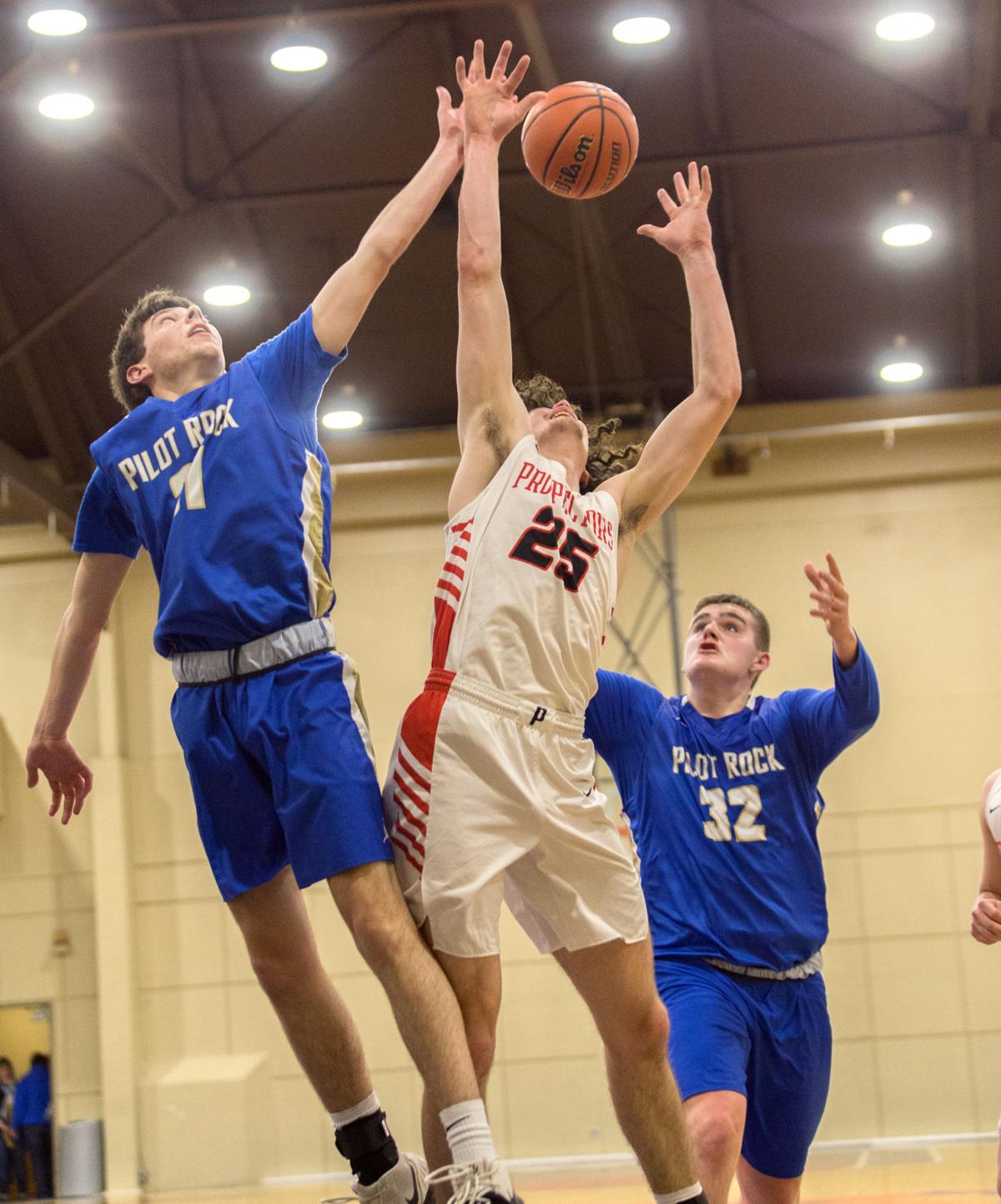 Tristan Morris of Grant Union goes up for a shot during Saturday’s boys Blue Mountain Conference championship game at the Pendleton Convention Center.

At the championship round of the Blue Mountain Conference district tournament at the Pendleton Convention Center Saturday, the Pilot Rock Rockets used a 24-6 second quarter to pull away from the league’s second-ranked Grant Union Prospectors for good as they rolled to a 68-40 victory to win the tournament title.

The Prospectors, with the superior league record, earned the conference title and a trip to the first round of the 2A state tournament.

“We shot the ball nearly 69 to 70 times, and they didn’t fall, and sometimes that just happens,” Grant Union head coach RC Huerta said. “It was just an outlier of a game, and that is what I told the boys in the locker room after the game.”

The Prospectors held an early 3-2 lead, but Rockets senior Payton Thurmond dropped in two back-to-back 3-pointers midway through the first quarter to take over the game at 8-6. Grant Union put together a brief 4-point run for an 11-10 lead with 1:58 left in the quarter, but Thurmond returned with another 3-pointer in the final minute, the Rockets up 13-11.

Thurmond gave the Rockets an even greater distance in the opening minutes of the second quarter, scoring 4 unanswered points for a 17-11 game. Tristan Morris pulled the Prospectors within 5 points at 22-17 with 3:51 left in the half, but the Rockets proceeded to ignite a quarter-closing 15-point run that put the game out of reach for good.

Pilot Rock senior Logan Weinke began the streak with a 3-pointer, and junior Tanner Corwin contributed 6 points to the run. At the half, the Rockets were ahead 37-17.

“We wanted to come out and play our game,” said Thacker, a Pilot Rock junior. “We knew we needed to lock down Morris. It was a pretty spread-out game. We played great team defense.”

Thacker helped the Rockets to a 25-point lead at 50-25 with 43 seconds left in quarter three, and Corwin and Weinke combined for 4 points at the line in the fourth quarter for a 31-point, 67-38 advantage.

Huerta said his team did not lose due to a lack of trying. He said Pilot Rock head coach Tyler Zyph did a great job in having his team prepared and ready to play.

“Tyler is a great coach,” he said. “His team was prepared, and they played well.”

The league recognized Huerta, naming him Blue Mountain Conference “Coach of the Year.”

Next up, Coquille will host the Prospectors in the first round of the 2A state tournament Feb. 29. The boys tip off at 5 p.m.