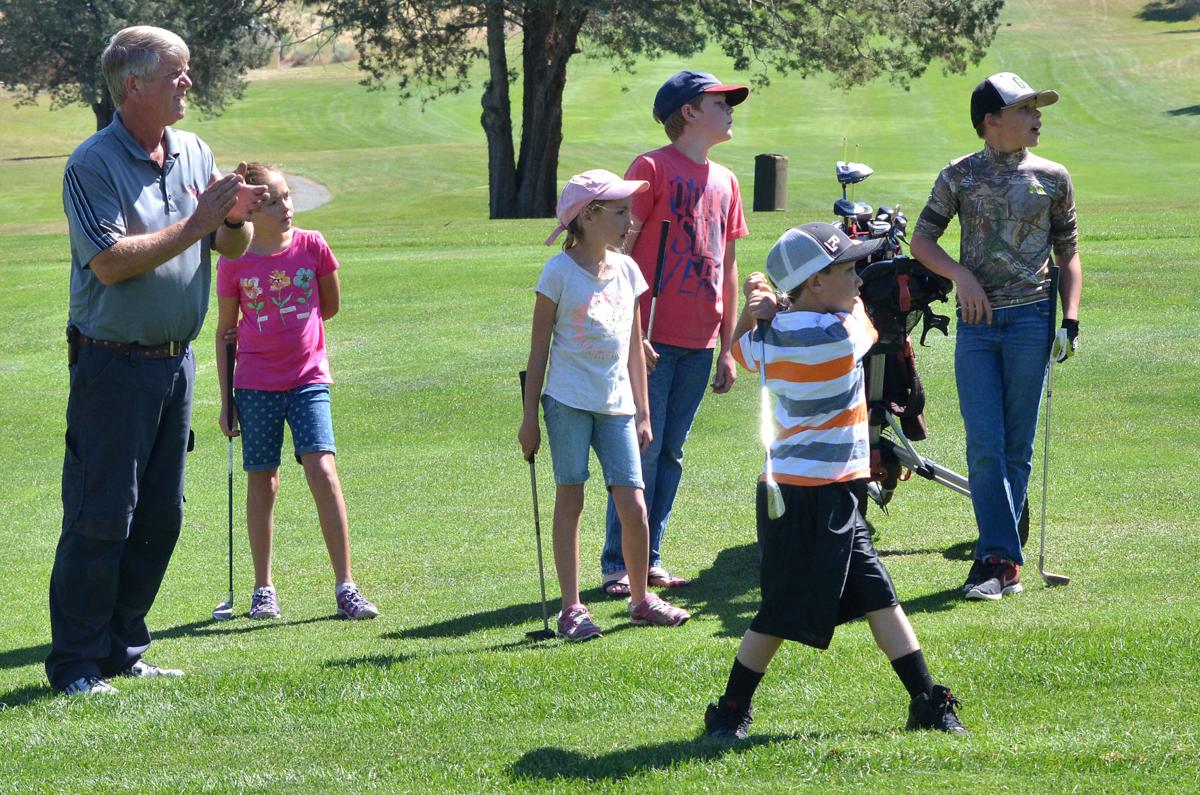 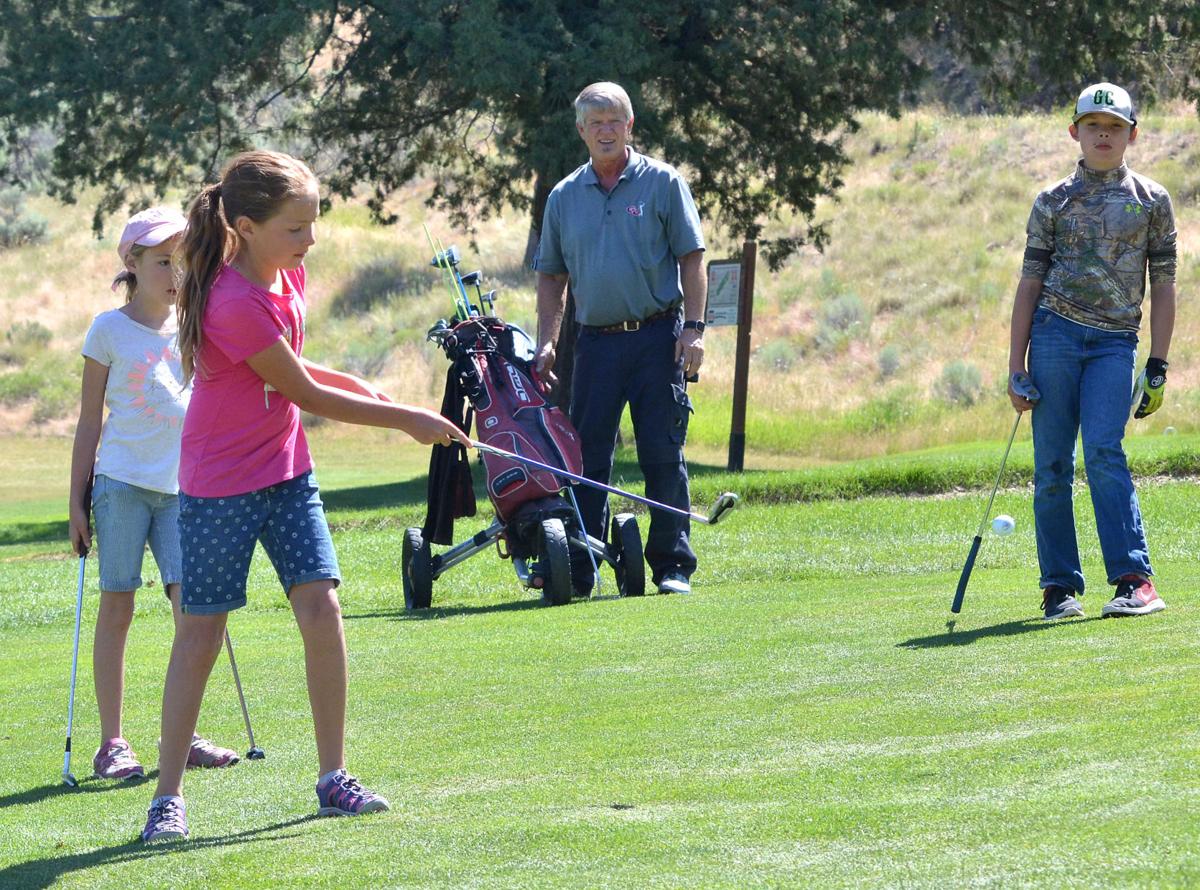 Madelyn Bailey, 10, chips the ball at junior golf, preparing for the next day's golf scramble. Looking on are her sister, Eliza, left, instructor Ron Lundbom and Riddick Hutchison. 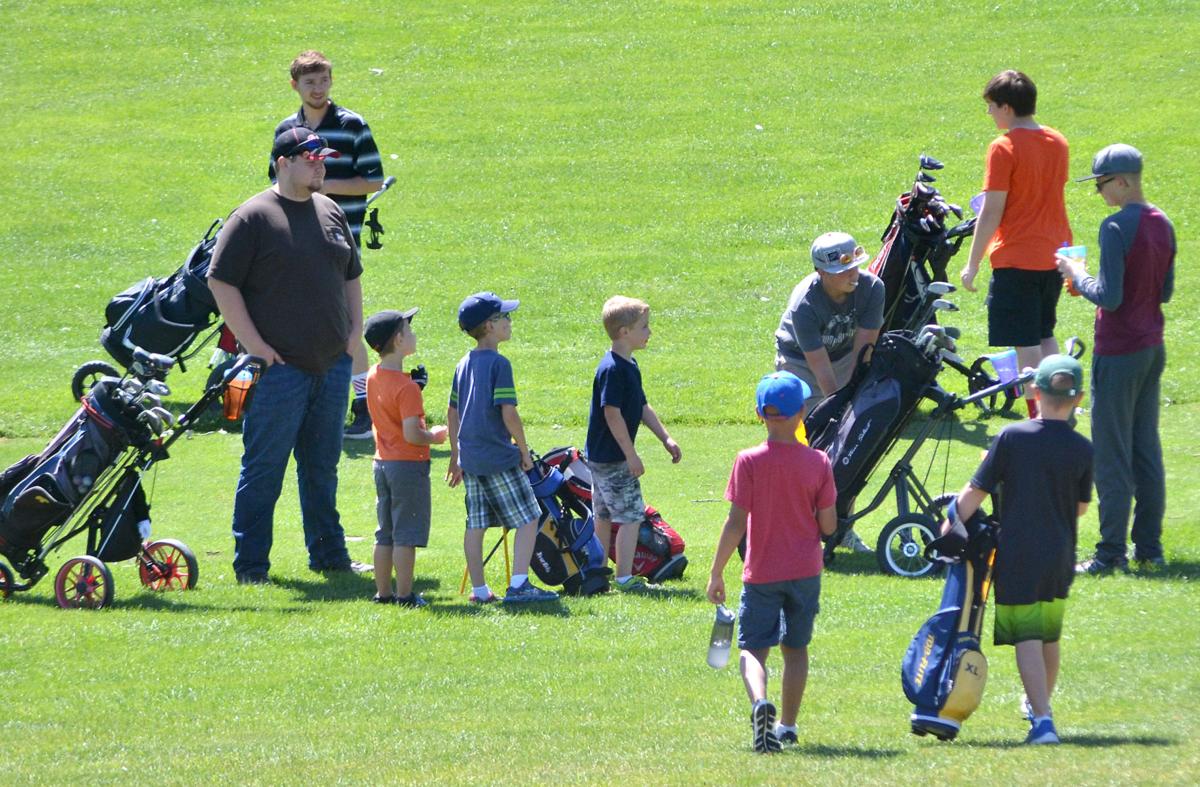 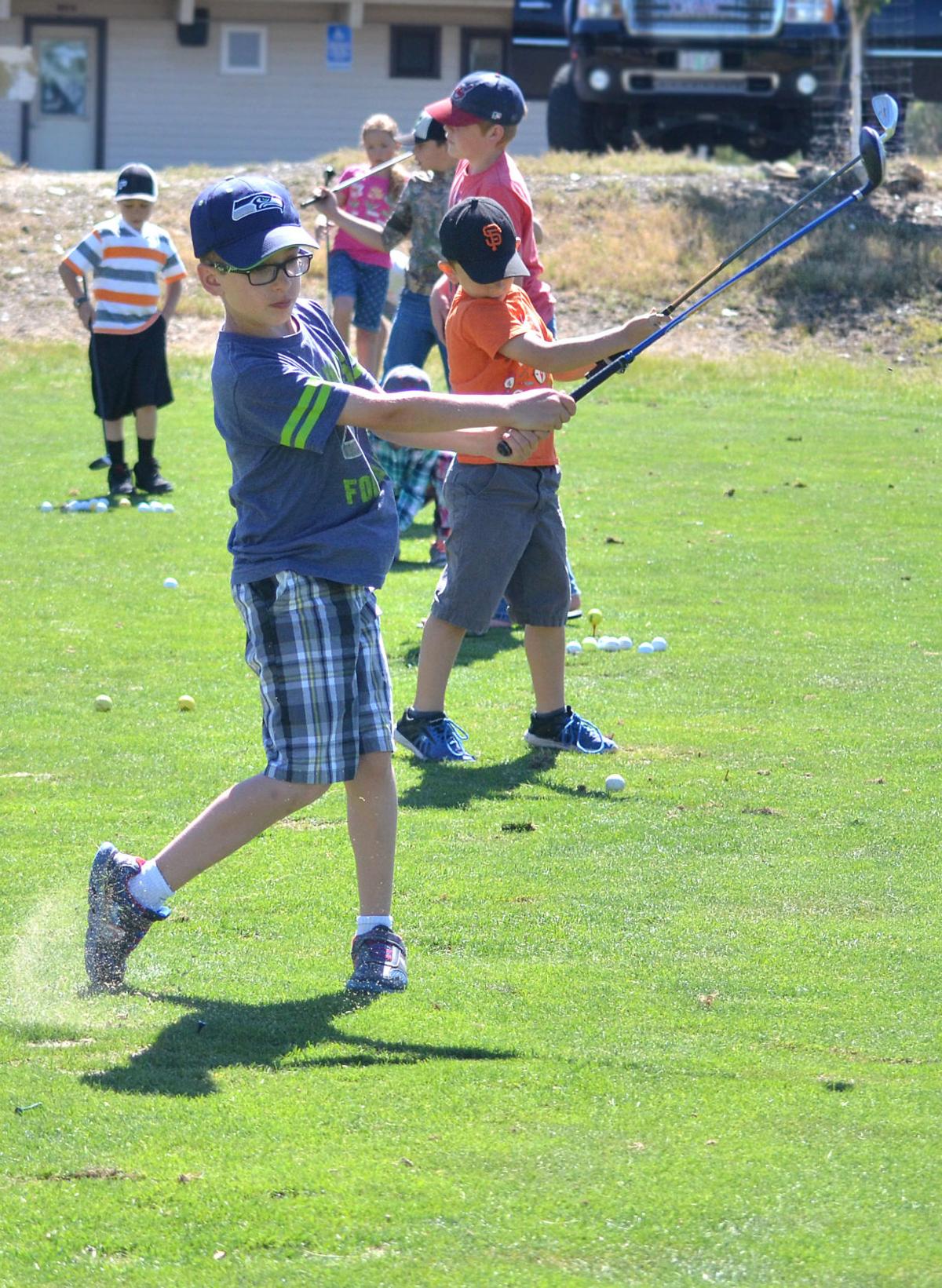 Brady Ineck, 9, and other junior golfers work on their swing at the driving range Thursday at the start of practice. 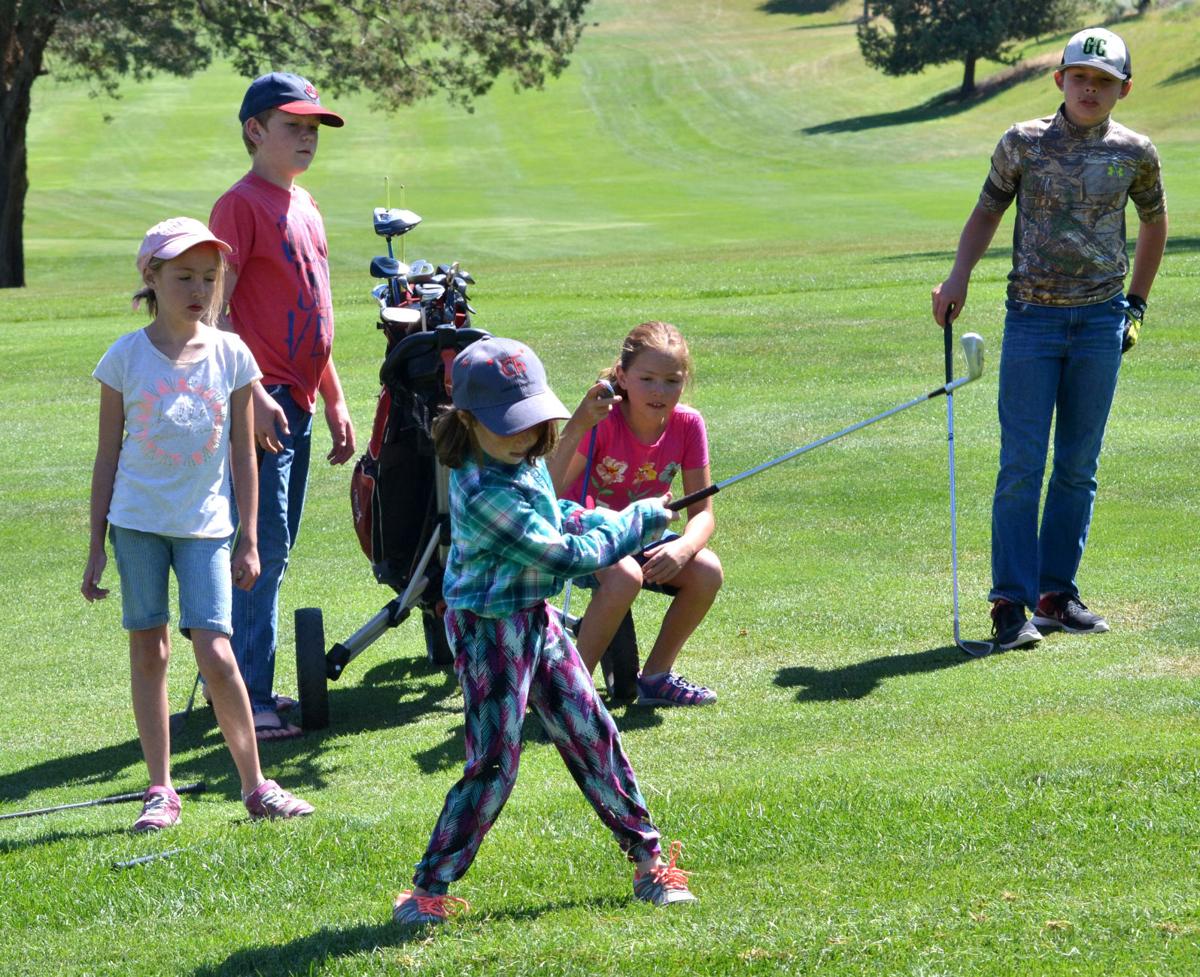 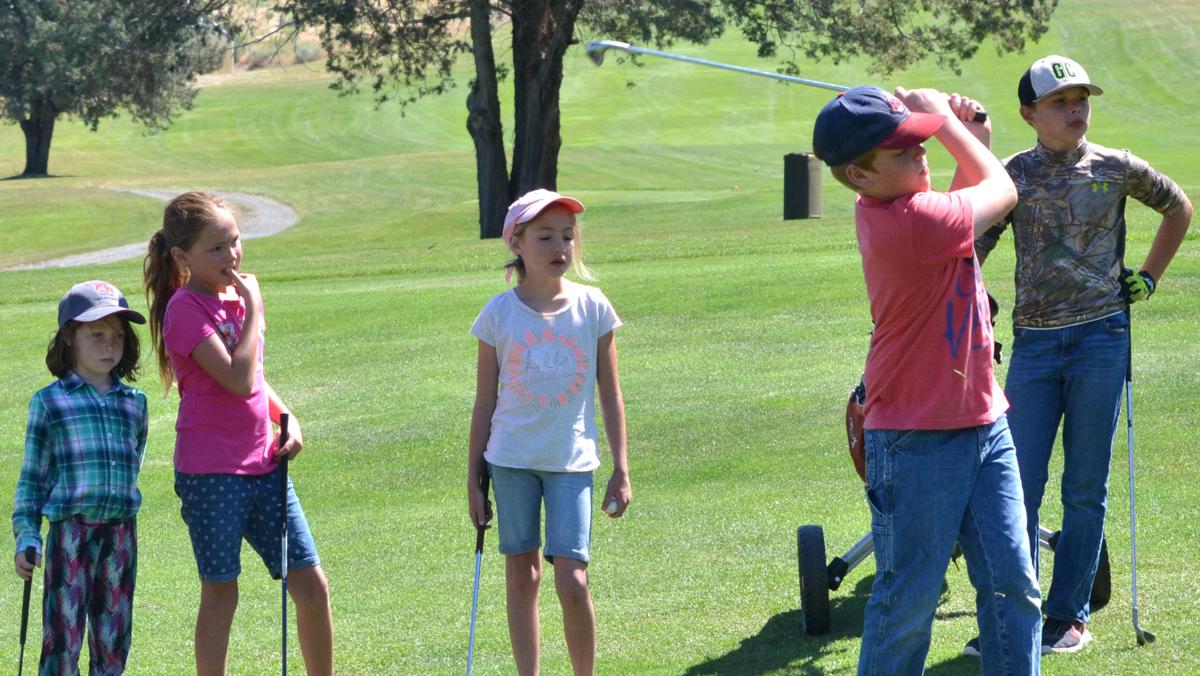 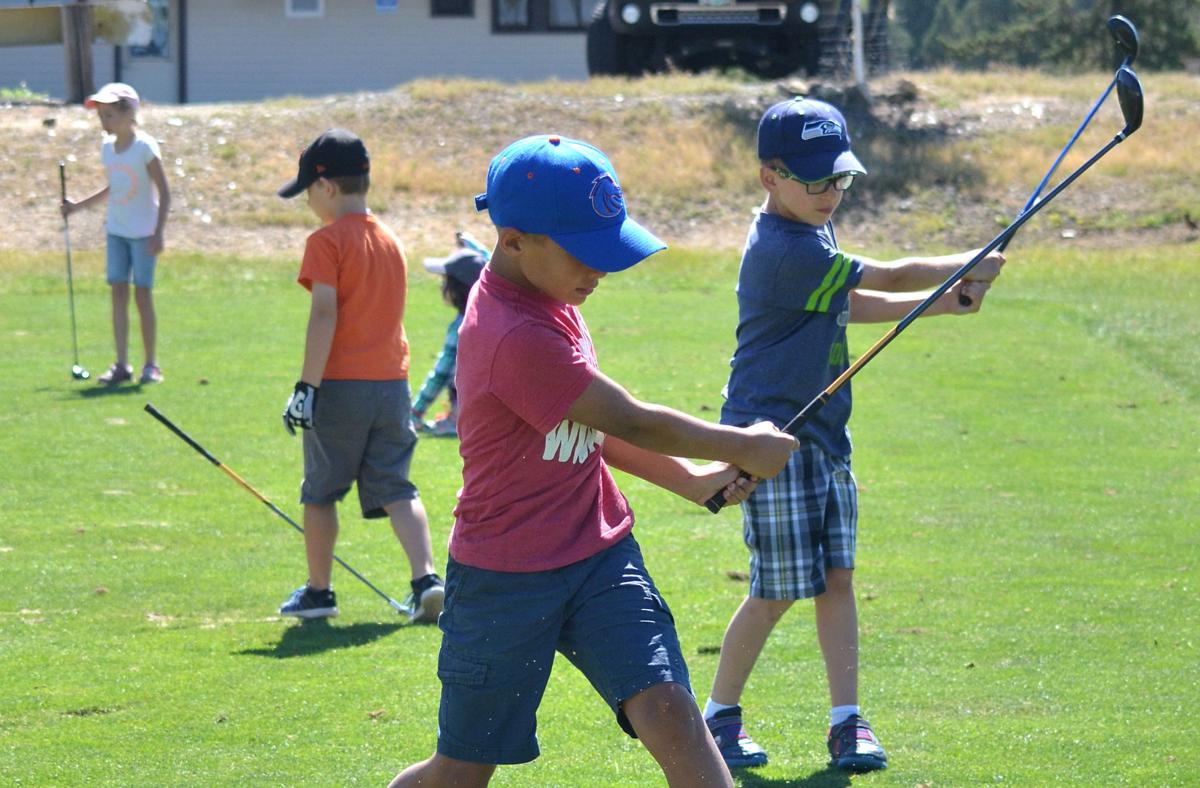 Madelyn Bailey, 10, chips the ball at junior golf, preparing for the next day's golf scramble. Looking on are her sister, Eliza, left, instructor Ron Lundbom and Riddick Hutchison.

Brady Ineck, 9, and other junior golfers work on their swing at the driving range Thursday at the start of practice.

Ron Lundbom is teaching the lifelong love of golf to a younger generation through Grant County Junior Golf.

There were 13 boys and girls from ages 7-14 participating in the camp, with some older Grant Union golfers assisting with instruction.

“It’s been quite successful,” said instructor Ron Lundbom, who is the Grant Union golf coach. “They’ve picked it up. I hope the kids have developed an interest in golf.”

He teaches stance, grip, etiquette, swing technique, putting and chipping and rules of the game during the camp.

This was 8-year-old Silvie Holliday’s third year participating in the camp.

“I think that it’s really fun to come here,” she said. “I improved on my hitting a lot. The coaches teach you a lot, and I made a lot of friends.”

She added, “My favorite part is putting.”

Riddick Hutchison, 12, said he likes the camp for the opportunity to hang out with friends, and he enjoys the golf scramble.

“I’ve learned a lot, and the coaches are awesome,” he said.

This was 14-year-old Parker Manitsas’ first time at the camp, and Lundbom said he’s been a quick learner.

“It’s a pretty fun sport,” he said. “It’s not like a sport that ends when you graduate. This camp is a good opportunity. You learn a lot of good stuff about the sport of golf.”

Lundbom said he is dedicating his weekly game to the Wednesday junior golf nights when any youth ages 8-18, or even up to 20, can play a round at John Day golf course at 5 p.m. each week.

With the year-long membership, a parent can choose to walk along with their youth and watch or help them, and not just on junior golf night.

Lundbom said members of the girls varsity golf team were interested in keeping their skills up over the summer.

“They want to practice and just have fun,” Lundbom said.